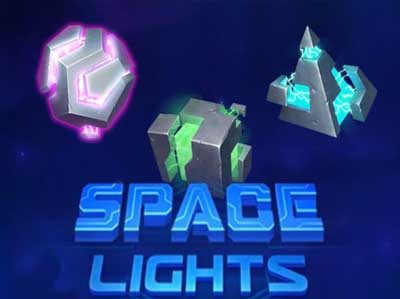 Space Lights is a futuristic slot game by software developer Playson. Set somewhere in an intergalactic dimension, it actually has a very peaceful vibe. You’re basically floating somewhere it the blue depths of cloudy, star-filled space. The soundtrack is also pretty cool, very futuristic sounding with a distinctive electronic feel to it. As for the symbols in this slot game, they represent very different objects in various shapes in sizes. They may take a little getting used to at first, but if you’re concerned with their value – you can always check for it in the paytable. Generally, the more ‘solid’ the symbol looks, the higher its value will be. Thus, the 3D pentagon shaped object with the purple light is the most lucrative of the regular symbols. 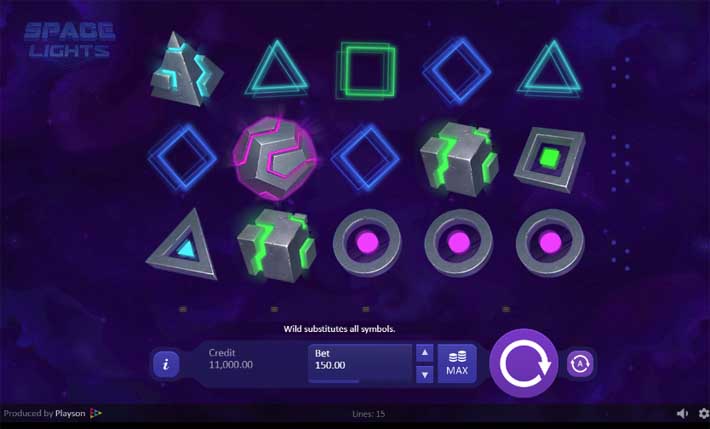 As for the layout, the symbols float on 5 invisible reels, each of which has three rows. So, it’s basically your standard grid. There are 15 paylines here, and all of them fixed. All you can adjust here is the betting amount you would like to play with. This means your stakes here can range from 30p per spin up to a maximum of £75 per spin. Space Lights has an average RTP of about 96.11%.

The most lucrative symbol on these (invisible) reels is the Wild symbol, of which there are in fact two. They have the capacity of awarding you up to 20 times your total stake. Both Wild symbols are yellow in color and both have a ‘W’ on them, to make them easier to distinguish. One is a regular Wild, which will replace any of the other symbols to help create winning combos. The other fulfills those exact same obligations, but is also a Sticky Wild, meaning it will lock in place.

As you play, during each spin a Portal will randomly target one of the reels. Your aim will be for the upper symbol on that reel to be part of a winning sequence. In that case, that symbol will become a Sticky Wild, activating the Space Light mode. If the next symbol on that reel is then also a part of a winning combo, it, too, will become a Sticky Wild. With each next Sticky Wild, a respin will be triggered. The Space Light mode will only end when no more Sticky Wilds appear on the reels.

However, you will be looking to fill that one reel with Sticky Wilds, because then you will receive the Bonus Prize. Note that Space Light mode will act a bit differently on the rightmost reels 4 and 5. It will be enough for only one of the upper symbols on either of those reels to be part of a winning combo for both reels to fall under the Space Light.

Space Lights is certainly not your typical slot game. Gameplay here is different than in most slots you see today and might take a little getting used to. But all in all, it’s a stimulating slot with opportunities for big wins.