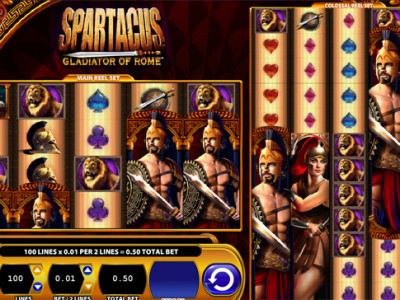 Hear the roaring of the crowd as they welcome Spartacus to the arena!

Everyone is aware of the stories surrounding Spartacus, whether that be via reading or via watching the award-winning television show. However, now you can follow him on his adventures via the Spartacus Gladiator of Rome slot game. This game has two sets of reels, both filled with various weaponry, gladiators, lions and both Spartacus and his female gladiator companion. While there isn’t any real kind of soundtrack included, or at least, none that really relates to the theme of the game, the noisy crowd in the background provides a certain sort of atmosphere.

The main reel set that you play on contains five reels and four rows, while the colossal set features five reels and 12 rows. There’s a total of 100 paylines included, although players do have the option of decreasing these. The coin value you are able to wager ranges from the minimum of £0.01 and the maximum of £5.00 per two lines. This allows an overall maximum wager of £250 per spin to be placed.

There’s a wild symbol included, represented by the game’s logo. This substitutes other symbols to create a winning combination, except for feature symbols. Any four stacked wilds appearing on the main set will transfer to the colossal set, turning the entire reel into a wild.

The Colosseum acts as the game’s feature icon, and this is a scatter symbol. This will only appear on the first, third and fifth reels of the main and colossal reel sets. Three of these symbols appearing will provide eight freespins, four will provide 12 freespins, and five will provide 20 freespins. If one or more wild from a stack appears on a reel of the main set, the rest of the stack will nudge into place, making all four reel positions on the reel wild. The wild will then transfer over to the colossal reel set, making the corresponding reel wild.

This game provides a great product for any fans of ancient history, while those players who enjoy unique games will also get a thrill.