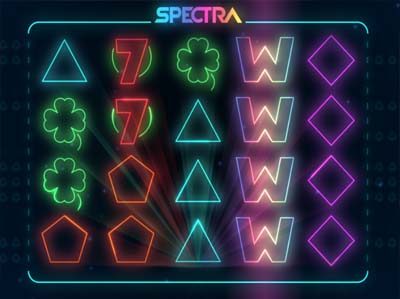 Spectra is a futuristic slot game by slot machine manufacturer Thunderkick. The design and layout of the game are pretty simplistic, but in a good way. You will be moving through space, as the backdrop offers a serene and peaceful journey through an endless sea of blue. The reels are actually a hologram, offering that spaceship kind of feel. The symbols on the reels start off with the lower value geometrical shapes: circle, triangle, square, diamond and pentagon. Following these are a little bit more familiar slot machine symbols: a four-leaf clover, bell, lucky 7 and Bar. Impressively, the electronic soundtrack in this game is rather sophisticated.

As for the layout, it features 5 reels and 4 rows with a total number of 30 paylines. The paylines aren’t subject to adjustment, but you may regulate your stake amount. Bets can range from 10p per spin up to £100 per spin and the RTP of this slot machine is a roughly satisfying 96.4%. 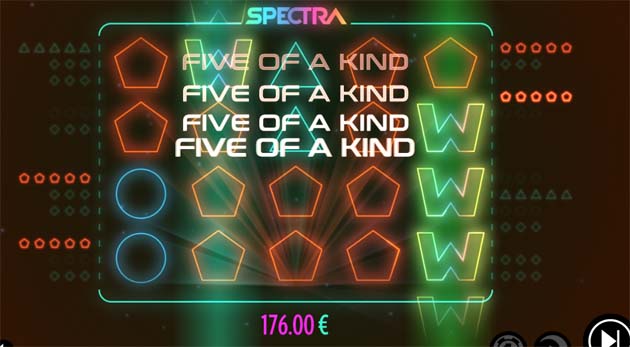 The rainbow colored neon W is the Wild symbol in this slot game. What’s more, it’s also the highest paying symbol on the reels, in addition, it can replace any of the other symbols to help create winning combinations. And if that’s not enough, the Wilds always appear in stacks of for, which can make for even greater winning opportunities.

Spectra doesn’t have any extra bonus features in the traditional sense. That is why, instead, the developers have put quite a bit of weight into the Wild symbol. Aside from appearing stacked and fulfilling its ‘wildly’ duties of substituting for other symbols, there’s even more to it. Each time stacked Wilds appear on the reels, they will trigger a Wild respin. And even that isn’t all of it. During each respin, the Wild will nudge towards the middle of the separate reels, as per the Wild Nudge feature.

This way, for example, if you land a Wild symbol at the top of a reel, during the respin it will move down one position, making place for the second Wild. What’s great about this feature is that it occurs fairly often. In addition, you can get several respins at a time, which could potentially make for some handsome payouts. The maximum possible win you can count on in this game is a whopping 2,400 times your stake.

Spectra offers a rather pleasant, though repetitive gaming experience. That would mainly be due to the lack of thrilling bonus features. Despite the fact that this is a high variance slot, you can still score smaller wins relatively often.