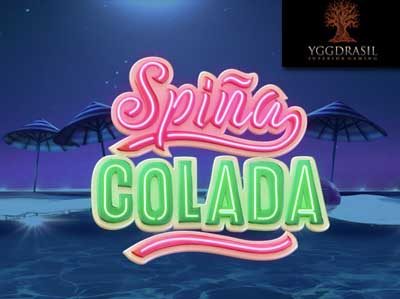 Spina Colada is a very summery online slot game by software developer Yggdrasil. If you’ve had enough of the summer heat, wherever you are, you can use a short little vacation to some tropical island and have pina coladas served to you under a straw umbrella. Sounds lovely doesn’t it? And that’s also the kind of vibe that Spina Colada gives off. With the easy going, light soundtrack playing in the background, you might as well not have a care in the world. The backdrop is clearly showing you the pool of some tropical resort, and the reels here are also the pool bar! There are various exotic drinks on offer, just take your pick. And with all those voices in the background, you can tell it’s a pretty busy place – probably because of the assortment of delicious cocktails. 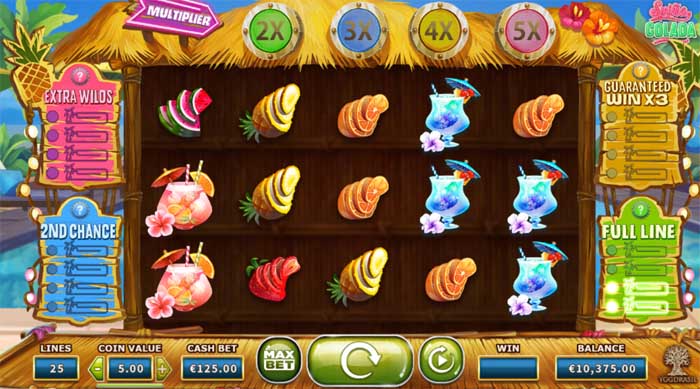 But the symbols here aren’t all just alcoholic beverages for those who’ve decided to treat themselves at the beach. As a matter of fact, the lower value icons here include some juicy looking fruit icons, all neatly sliced and ready to go on your glass. First are the watermelons, following which is the pineapple – a key ingredient in making pina colada, by the way. Then there are the kiwis, oranges and finally – the strawberries. This then brings us to the higher value symbols of the cocktails. We can’t quite say what type of drink they are, but we can distinguish them by color: green, blue and orange (or pink). The last one is also the most lucrative of the lot, with payouts reaching up to 200 coins. As for the layout, it’s pretty typical for your average slot with 5 reels and 3 rows. There is a total of 25 paylines here, but they are fixed and you won’t have the opportunity to adjust them. Stakes here are fairly liberal, though, starting as low as only 10p per single spin. And the maximum amount you will be able to wager here is £125 per spin. The RTP is also pretty decent at an average of 96.30%.

First in line here of the special symbols is, of course, none other than the Wild. It comes in the shape of the game’s logo and can land in any position, anywhere on the screen. However, don’t expect it to offer you any payouts – that’s not part of the deal here. It will, however, be able to substitute for any of the other symbols on the reels. That way it can help create better winning opportunities. In addition, it can also transform into freezing symbols. Freezing symbols in this slot game occur when you land at least 3 symbols of the same kind on at least 1 payline. Those symbols then ‘freeze’ in place and trigger a respin, whilst remaining on the reels. If as a result of that respin you happen to land more symbols of that type – another respin will occur. And that can go on until you either fill the screen with icons of the same type or don’t land any more of them at all. Yggdrasil Gaming also have this feature in their Winterberries slot. 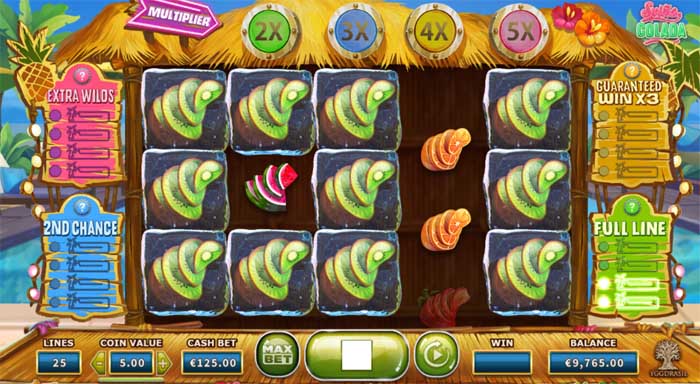 In addition, filling columns will also award you a multiplier, starting with 2x and potentially reaching up to 5x. But besides this, Spina Colada also boasts a total of 4 random features. The features in store include, for example, the Extra Wilds feature. You get an extra Wild on both reels 2 and 3 to guarantee you a win. Another feature here is the Full Line feature, which will add 5 symbols of the same kind to a payline. Then we also have the Guaranteed Win x3 feature. This one will make sure that you continue receiving spins, until you land a winning combo. What’s more, the prize from that spin will be subject to a 3x multiplier. 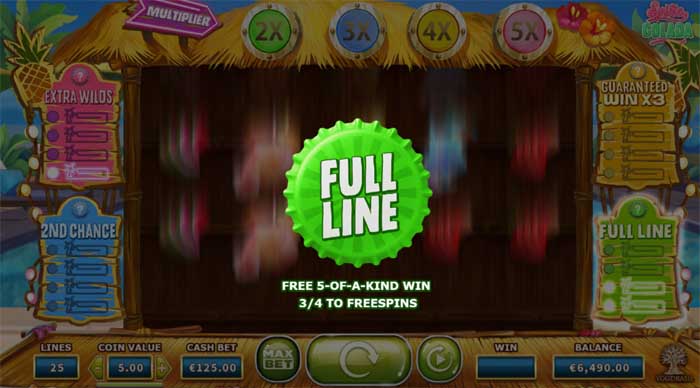 And last but not least, there’s the Second Chance feature. It will add 1 or 2 symbols on the screen to create a winning combination of at least 3 symbols. But even that’s not all that Spina Colada has to offer its players. Notice also that on the sides of the reels, there’s a meter for each of these four features. Once you trigger a certain feature 4 times in a row, you will receive 4 freespins with that particular feature active. 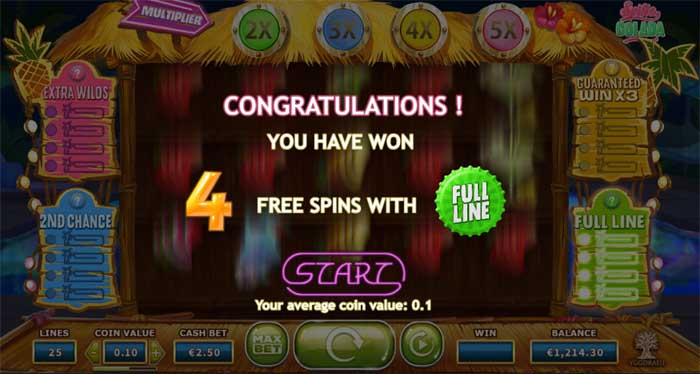 Spina Colada is certainly a small tropical bundle of joy. There are a bunch of features here waiting for you to take advantage of. Of course, it may seem like it takes forever until you actually trigger the freespins round and at that only for those measly 4 freespins. But along the way you can count on some pretty attractive prizes, too. Plus, it certainly doesn’t hurt that the visuals are up to standard. And in addition to that you will get to have a go at the random features at fairly regular intervals. Not to mention that the respin can also occur pretty often. The random feature with the highest potential reward is the Guaranteed win x3 feature, where (if you are super lucky) you can get a full screen win, giving you both a 5x and a 3x multiplier, for a total win multiplier of 15x.