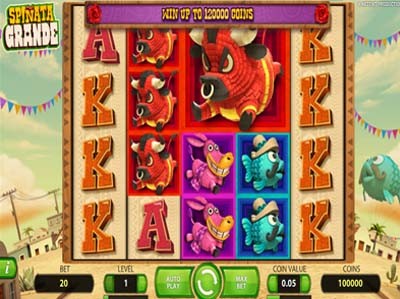 On the dusty streets of Mexico, Spiñata Grande brings forth a fun and exciting festival for you to take part in. With reels filled with various different colourful piñata’s, it’s hard not to get in the party spirit when playing this game. You’ll find them in the shape of a donkey, a fish with a moustache, an angry looking bull, and a vibrant toucan. The remaining symbols are made up by the regular slot icons of A, J, K, Q and 10, and a Mexican-influenced ditty plays with every spin.

There are five reels and three rows in this one, and a total of 40 fixed pay lines have also been integrated. Players can alter both the coin value and the bet level, with the former being changeable between £0.01 and £1.00 per line, and the latter being able to be changed between one and 10. Therefore, players have the opportunity of placing a maximum bet of £200 per spin in this game.

The first thing you’ll notice about these reels is that they feature colossal symbols. These are larger versions of the regular sized symbols, taking up a 2×2 or a 3×3 area on the reels.

There’s also a colossal wild icon, which is represented by the cinco de mayo-inspired skull symbol. This appears in freespins only and substitutes for all icons, except colossal bonus symbols. And speaking of freespins, you’ll be awarded five of these if you manage to spin three freespin icons, represented by the star-shaped piñata.

The game also includes a mini-slot feature, which is triggered when the big version of the bonus symbol appears. Determined by how much you can see of the Colossal bonus symbol on the reel area, it will turn into three, six, or nine individual mini-slots.

Spiñata Grande is a fun and unique game in its own right, which provides players with an intriguing product to play that has been equipped with exciting extras.