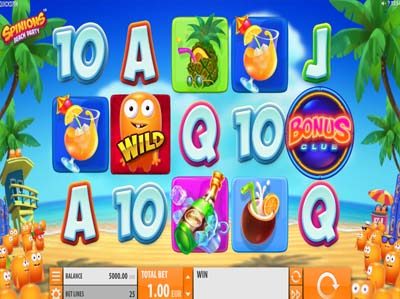 It’s time to have a fantastic beach party, and the only way you can do this is by playing the Spinions game from Quickspin. It will transport you to the sandy shores and crystal clear waters of a tropical island, where palm trees will surround your gaming layout. Upon the reels of this game, you’ll find various different icons, with the first of these being the regular A, J, K, Q and 10 symbols. Another five standard symbols exist in the form of different tropical cocktails – one which is offered in a coconut shell, another inside a pineapple and the third offered up alongside a watermelon. There’s also an orange cocktail and a bottle of champagne.

The game is presented on a fairly standard interface, with five reels and three rows incorporated for the 25 bet lines to be played upon. These are not able to be customised in any way, but you do have the option of changing your bet placed per spin. This provides you with the chance to place a bet of between £0.10 and £100 per round. There’s also an autoplay function, allowing you to spin up to 1,000 consecutive times at the same bet level.

When you play this game, you’ll also be able to access a few special features as well, starting with the Spinion wild symbol. This stands in for all other icons, except for the bonus scatter symbol, and if five of these come into view on the reels, you’ll receive a maximum pay out of 2,000 coins.

As far as the bonus scatter symbol is concerned, this can appear in the base game on reels one, three and five, and three of them coming into view will trigger the 10 freespins round. During this freespins function, the wild icons are sticky for the duration of it.

There’s also the addition of sticky wilds in the main game, and these are triggered when two or more Spinion wilds come in to view. These will also trigger a re-spin of the reels, and these continue until no further new wilds appear.

This one is definitely an entertaining and visually appealing game from Quickspin, and its special features make it all the more attractive.