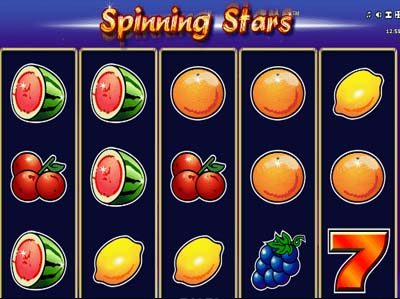 Spinning Stars is a simplistic, old school slot machine type game by developer Novomatic. We’ve seen a number of games that share a similar theme by this provider and we can’t really say that this one stands out from the rest. In fact, we’ve seen better. The backdrop is a simple blue, as are the reels, only in a darker shade. This appears to be pretty standard, as it makes for a good contrast to the symbols. And speaking of them, they all include the most familiar and recognizable slot machine symbols. They start off with the cherries, lemons, oranges and plums. Following these ones there’s the slightly more lucrative watermelons and grapes. Last but not least are the gold bell and the lucky number 7. The graphics quality of these symbols, however, isn’t quite the best this developer has to offer.

The setup here features the rather customary 5 reels and 3 rows, with a total of 10 paylines. Stakes can range anywhere from as little as 10p per spin and up to £100 per spin. And if you’re familiar with other Novomatic slot games, you’ll know that most are at the same RTP mark of 95%, as is this slot.

As unusual as it might seem for a simplistic slot game like Spinning Stars, there is actually a Wild symbol present on the reels. It comes in the shape of a gold star and the word ‘Wild’ written on it. As a Wild, it can replace any of the regular symbols to help create winning combinations. It can only appear on reels 1 and 5, though, but there’s one more feature that is has. 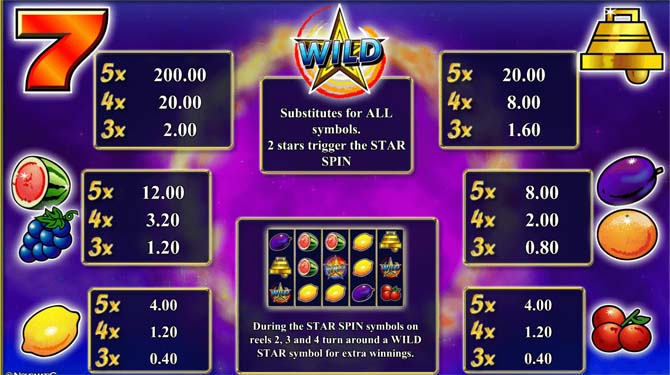 If you land 2 Wild symbols, one on the first reel and one on the last, this will trigger the Star Spin bonus feature. As a result, the two Wilds will remain in place and an additional one will appear in the middle position of the 3rd reel. Next, all the symbols around the central Wild, hence those on reels 2, 3 and 4, will rotate clockwise 7 times. Each rotation may result in a winning sequence and all of them will be calculated. Finally, after these 7 rotations, the Wilds will vanish and regular gameplay will resume.

In addition, Spinning Stars also has a Gamble feature, if you would like to diversify the base game. It will give you the opportunity to gamble your prize after any winning spin. If you decide to gamble them, a new screen will provide you with a simple side game of double or nothing. The objective is to guess the correct color of the card (either black or red). If your guess is correct, you double your amount, if you’re wrong – you lose it.

Spinning Stars is by far not the most sophisticated slot out there, but it does feature an interesting bonus game. The fact that it even has one is already quite the treat, as slot games of this theme usually don’t have any.