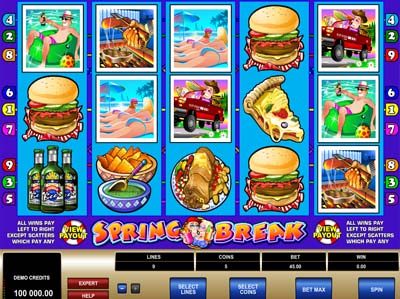 Who doesn’t enjoy a spring break? It’s one of the nicest times of the year, and what better way to celebrate it than by joining in the fun via Microgaming’s online video slot of the same name? This one brings together all the sun, sea and sand of a vacation and puts it right in front of you to delight in. Therefore, you’ll find icons on this game’s reels of people sunbathing, bottles of beer, various types of food, sunsets and even a guy floating on a blow up ring in the sea. Absolute bliss, no doubt!

A five reel and three row set up creates the layout for Spring Break, and a total of nine pay lines have also been added alongside. The coin value is changeable from £0.01 per line up to £1.00 per line, and the active pay lines can be altered as well, should you choose to wager on less. The amount of coins you can play per round is changeable between one and five, giving all players a chance to place a maximum overall wager of £45 per spin.

The ‘Beach Party’ symbol can reward you with 15 freespins, should you manage to spin three, four of five of them anywhere on the reels. All wins are tripled during this feature, and another 15 freespins can be won again in the same round.

The game’s logo acts as its wild symbol, and any win that includes this icon will double your pay out while substituting other icons. The only symbol excluded from this is the scatter.

Spring Break is a fairly standard game to play, featuring your average wild and scatter icons, as well as a freespins round. Nothing is particularly overwhelming in terms of the extras included, but it does bring a sense of fun to your screen.