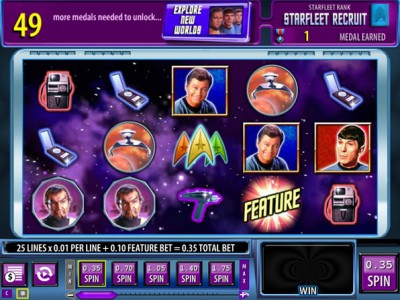 There have been several games created based on the recent Star Trek films. However, Star Trek Red Alert has been crafted around the original Star Trek series, featuring Leonard Nimoy as Spock and William Shatner as Captain Kirk. You’ll also find a couple of other characters from the famous television show, as well as icons of the technology and weapons used alongside. Furthermore, the addition of a sci-fi soundtrack in the game provides the ideal nostalgia for the game in question.

There’s a total of five reels and three rows in Star Trek Red Alert, while a total of 25 fixed paylines have been incorporated as well. Coin values can be switched from the minimum of £0.01 and the maximum of £3.00 per payline. With this in mind, players are able to place a maximum overall wager of £105 per spin. A total of 200 consecutive spins can be played via using the included autoplay button.

The Star Trek game logo acts as a wild symbol, substituting for all other symbols on the reels to create a winning combination, except for the feature symbol.

The feature symbol acts as a scatter, and three or more of these appearing anywhere on the reels will trigger the game’s Red Alert feature. Triggering this will award one medal, and the feature sees you fighting off invading spaceships. This is a freespins feature at the same time, and when three or more ‘Shields 100%’ scatter symbols appear on the reels, your spaceship’s defence will return to 100%.

Fans of the original Star Trek series will no doubt find this to be a thrilling game that is filled with enticing features and perks. Everything comes together exceptionally well to offer up an interesting game with exciting benefits.