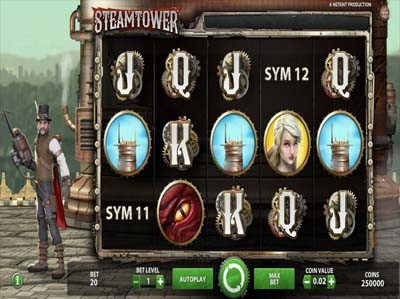 Climb the tower and win, states the tag line for this game, and it’s a very appropriate statement to make as well. Steam Tower takes on an altogether steam punk façade, offering up imagery of a gentleman wearing a top hat with goggles, and wielding a spear-headed gun, alongside a female companion and a red dragon’s eye. Cogs and cranks create the backdrop for its A, J, K and Q symbols, while the back of the reels show the base of a vast tower.

The game itself is presented in a five reel and three row interface, while a total of 15 pay lines have also been added to the product. These are fixed pay lines, however, the coin value and bet level can be very easily altered with the relevant buttons. The bet level increases from one to 10, and the coin value is able to be changed from £0.01 up to £1.00 per line. This allows all players the chance to place a maximum wager of £150 per spin.

The wild symbol in this game is represented by the spear-headed gun, and these substitute for all other symbols on the reels to create a win. Stacked wilds are also a part of this game, being represented by the steam punk gentleman. One or more of these covering the whole reel in the main game only will activate 10 freespins, and the game will ascend to the first floor. Should a standard wild appear during the freespins round, the amount of these will increase by two, and the game will again ascend to the next floor. This continues until it reaches the 16th and top floor.

During freespins, all bet line wins are multiplied by the inclusive multiplier. This is updated before each freespin and is dependent on the floor level. Should the game reach the top floor, the player is also rewarded with a bonus win of 1,000 coins.

Steam Tower offers up a great game, with a unique theme to build around. The special features included make for an all around entertaining game.