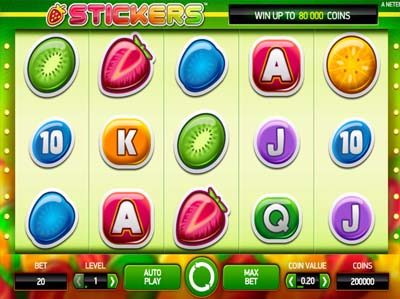 As another of Netent’s simple and easy games, Stickers provides a wonderfully vibrant addition to the developer’s catalogue of products. As such, there isn’t really any huge kind of theme behind it, apart from the fact that the icons are all designed as actual stickers. These are also in the shape of various different fruits, with a strawberry, orange, kiwi and plum all being included on the reels. There’s also the addition of A, J, K, Q and 10 symbols, which are also presented against coloured backgrounds.

Apart from this, the general overall layout of the game is five reels and three rows large, so, therefore, the interface should be quite familiar to regular video slot gamers. The developer has also added a total of 20 different pay lines to it as well, and these have all been fixed in place. You’ll have the chance to adjust the wager you place per round though, and this is done by altering your coin value between £0.01 and £1. You can also change the bet level around between one and 10, and pushing both of these sections up to their maximum level will provide you with a maximum overall wager amount of £200 per spin.

Because it’s one of the simpler games of Netent, Stickers isn’t overwhelmed with special features. However, the one it does have is quite nicely integrated into it. In fact, the special addition is more so two combined into one, and this is called the ‘Sticky Spin’. To trigger this, you’ll first of all need to spin a wild icon into view, which is represented by the pink spade playing card suit with the word, ‘WILD’ written across it. Wilds substitute for all other icons on the reels in order to form a winning combination, and it will also act as a sticky wild in the process.

As the sticky wild takes effect, it will glue itself to the current location and it will set the reels of spinning once more. If there are more sticky wilds which appear following the re-spin, the process starts all over again, and all wilds are again held in place. This continues until no further wild icons show up after a re-spin. Because of this, there is the potential to fill the entire screen with wild icons, which pays out a huge amount!

When compared with other more simplistic games from this developer, such as Starburst or Sparks, it seems to us that Stickers falls a little bit short. That’s not to say it’s bad in any way, as it includes very high quality graphics and intriguing game play.