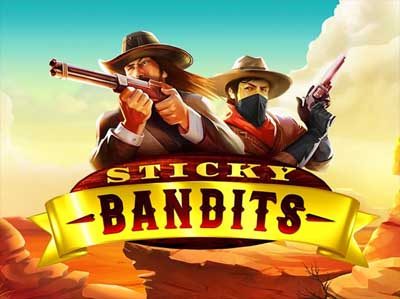 Sticky Bandits is an online slot game made by Quickspin. It centers on the Wild West, with cowboys, shootouts, outlaws and newly built railways – the whole package. Obviously, it takes place in the desert, as you can clearly see in the backdrop of the slot. Red rocky cliffs line the horizon, with only a green patch of cactus for contrast. You can see the railway passing below an arch of rocky cliffs to the left of the reels. And above it all is a peaceful blue sky with white fluffy clouds floating about. We like the nice touch with the guns above the reels, pointing in opposite directions of each other. They have neat golden ornaments. And it would be terrible crime if we did not mention the awesome soundtrack playing in the backdrop. You might as well be watching one of the cult spaghetti westerns. So you might want to leave the sound on for a more authentic feel. 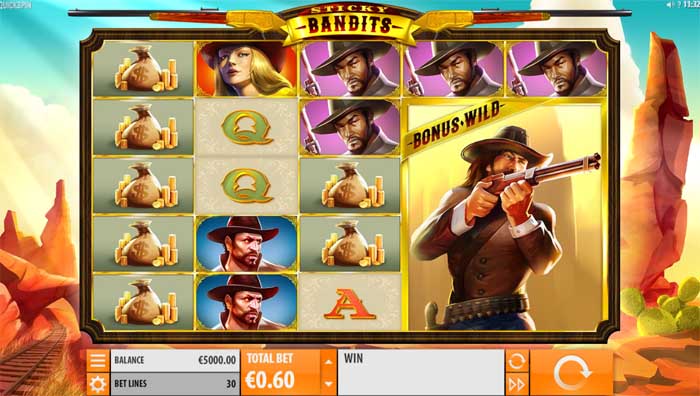 As for the symbols on these reels, they include the lower value playing cards in typical for that time and place font. There are only four of them, however, and they are A, K, Q and J. Moving on to the higher value icons, things get a little more interesting. First we have a pack of dynamite that’s already been lit and it on its way to explode. Then there’s a bag of gold coins with the $ sign on it. Next up are the three character symbols. We have two cowboys, one of them – with a revolver. And finally the most lucrative character symbol is actually a cowgirl. This brings us to the slightly unusual layout that we have in Sticky Bandits. There are 5 reels with 5 rows and a total number of 30 paylines. The paylines are not subject to adjustment. However, the stakes are fairly liberal, starting at only 15p per spin. The maximum amount you will be able to wager is £90 per single spin. And the RTP in this slot game is 96.58%.

Sticky Bandits boasts a total of two whole Massive Wilds symbols. They are massive, because they can cover two entire reels each. Both of the symbols come in the form of your typical Wild West bandits. And more importantly, both of them can act as both Wilds and Bonus symbols. This means, on the one hand, that they will be able to replace any of the other symbols on the reels. In this way, you can count on them to help create better winning combinations. However, the Massive Wilds in this online slot game do not have the capacity to award you any payouts of their own. And on the other hand, they will also be able to trigger this game’s special feature and main attraction – the freespins bonus round. However, they won’t be able to do it alone. In fact, it will be a combined effort of both the Massive Wilds and the game’s regular Bonus symbol. 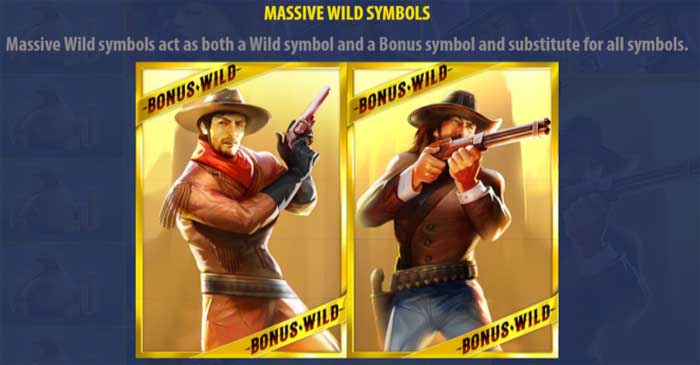 The Bonus symbol here is in the form of a train and can only appear on the first, leftmost reel. And in order for you to trigger the freespins bonus feature, you will be looking to land the Bonus symbol, as well as one of the Massive Wilds on either reel 2 or 4 at the same time. This will award you a total of 7 freespins with a special little extra. Any Wild symbols that had landed when you triggered the feature will remain in place for the duration of the whole freespins round. And if you happen to land any other Wild symbols during the freespins, they too will remain in place as Sticky Wilds until the feature ends. 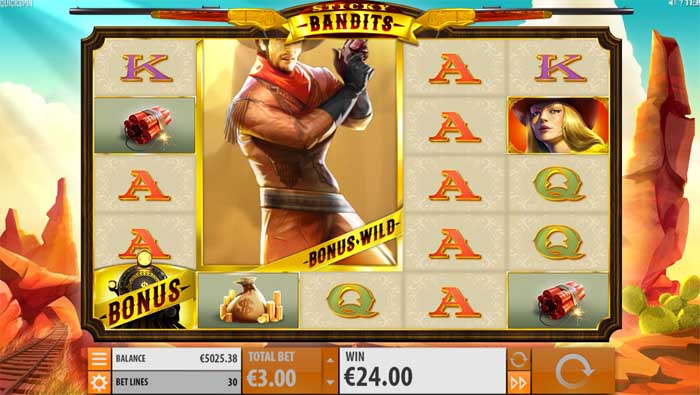 Note, however, that the Bonus symbol will not be present during the bonus round. This implies, in other words, that you won’t have the opportunity to retrigger this special feature. And hence you will also not get the chance to increase your number of freespins during this bonus round. Nevertheless, this is a feature that you will certainly want to look out for. Especially due to the Sticky Wilds extra, spins here can prove to be the most lucrative, with potential payouts reaching up to 739 times your total stake.

Sticky Bandits is without a doubt a very fun online slot game to play. There’s the awesome soundtrack and amazing graphics with thrilling animated sequences. Especially once you land the Bonus symbol on reels one, just watch the next two reels be lined with fire as they slowly screech to an emergency stop. The single special feature here is where all the action is really at. And due to this game’s medium to high volatility, we’d say you will get to trigger it at rather decent intervals. And the wins from it can be very much worth your while. The dream set up on this slot is to trigger the bonus with the two big sticky wilds covering reel 2-5. If you get that set up on the bonys trigger, you know each free spin is going to be a big win.