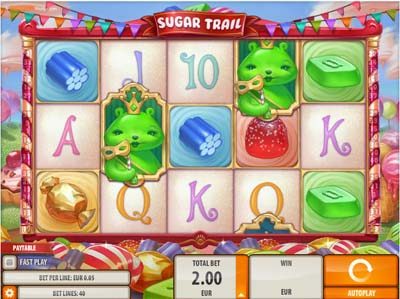 Sugar Trail is all about candy, candy and more candy. And that’s exactly what you’ll find on the reels of this game…candy! Green ones. Orange ones. Blue ones. Red ones. Even striped ones. And all of them are different shapes and sizes. Isn’t candy just so visually appealing? And what’s more, there’s an intriguing/warped soundtrack that plays in the background to propel you through gameplay. And what would the sweet candy be without a few teddy bears? Well, those aren’t really something that are usually ever thought of together, but the different coloured bears also appear there.

The game has five reels and three rows, so a fairly standard slot game layout, and includes a total of 40 paylines. These aren’t customisable, but the bet that can be placed is. This can be changed between the minimum coin value of £0.01 and the maximum coin value of £2.00 per line. Therefore, this gives players the opportunity of placing an overall maximum wager of £80.

Sugar Trail includes a purple bear with a crown on its head, also known as the King Gummy Bear. This acts as a scatter symbol, and spinning three of these anywhere on the reels will trigger the freespins bonus round. Flying wild candy symbols will move around to random positions on the reels between each spin. Also, additional flying wild symbols can be awarded during this round.

The green bear with a crown on its head is the Queen Gummy Bear, and this is the game’s second scatter. Three of these appearing triggers the Re-spins bonus. Locked wild symbols will stay in place during all re-spins.

Finally, the blue bear with a crown is the Prince Gummy Bear – the game’s third scatter. Three of these appearing anywhere provides the Sugar Cash Bonus, which awards cash and win multipliers.

The main game also includes a regular wild symbol, which is represented by a collection of candy and substitutes for all symbols, except feature trigger symbols and the +1 freespins symbol.

Sugar Trail is a very entertaining Quickspin-game, for sure, especially thanks to the warped soundtrack and visually pleasing gameplay.