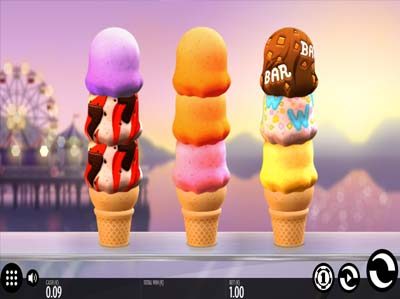 Sunset Delight is a deliciously unusual slot game by software developer Thunderkick. The main thing that makes it stand out from most other slot games out there is the fact that you won’t really be looking at reels in the traditional sense. Instead, you will have three mouthwatering ice cream cones looking back at you, with three scoops of ice cream each. Each of the scoops is in fact its own symbol. You can tell them apart by color. First is the purple scoop, and then value increases to the orange, pink and yellow scoops. Finally, there are colorful ice creams that have a 7, a Bar and a W on them. The backdrop pictures a very serene, late afternoon sky, with a Ferris wheel visible in the distance.

As we’re talking in terms of cones and ice cream scoops, there are 3 cones, representing 3 reels and 3 scoops on each of them are in fact 3 rows. You can bet with as little as 10p per spin up to £100 per spin. There 5 paylines in total and an average RTP of 96,30%.

The ice cream with a W on it is – you guessed it – the game’s Wild symbol. It is the most valuable symbol on the reels in terms of payouts. It can appear anywhere on the reels and replace any of the regular symbols to help create winning sequences. However, it cannot replace the Scatter symbol.

And this is yet another interesting aspect to this particular slot game. The Scatter doesn’t represent a separate symbol per se. Instead, it is a wafer that can be on pretty much any of the other symbols, which will essentially make them the Scatter symbol. It is responsible for activating the Bonus game, which will reward you 5 freespins.

During the bonus games, you will want to keep an eye out for the +1 Spin and +1 Step wafers. They act as the Scatter during the freespins. And as such they will award you either an extra freespin or will increase the multiplier by 1. You can reach the maximum multiplier of up to a staggering 100x! The multiplier will be applied to your wins at the end of the freespins feature.

Sunset Delight really is a delight in its own way. The original layout choice and design are certainly a novelty and add to the general appeal of the game. It’s a high variance slot, too, so winning possibilities are pretty alluring.