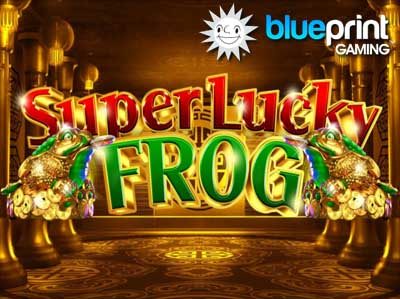 Super Lucky Frog is an online slot game by software developer Blueprint Gaming. It focuses on a Chinese theme of wealth and riches and gold. The graphics here are of pretty decent quality, and certainly help achieve that sort of atmosphere splendor and grandeur. As far as the color scheme here goes, things are rather typical for this genre, with gold and red being the dominant colors. The backdrop shows us the inside of an imperial palace, filled with treasures beyond your wildest imagination. There are tall gold columns on either side of the reels, and you can make out some traditional patterns on the floors. The backdrop of the reels is in the classic wine red, which provides a great contrast for the symbols on them. And there’s also a very pleasant soundtrack that’s fitting for this theme to accompany gameplay. 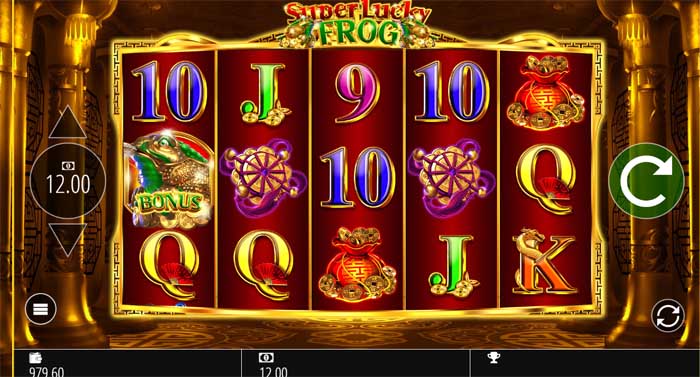 But it’s really the symbols that mainly help create the vibe in Super Lucky Frog. Almost all of them have to do with the theme, and even some of the lower value playing card symbols. For example, the King has a dragon winding around it. And the Queen icon has another deep red handheld fan on it. All in all, the symbols here include A, K, Q, J, 10 and 9. After that there’s a symbol depicting firecrackers and following it is a very elaborate, sophisticated-looking gong. Then we have yet another increase in value for the Chinese golden ingot. And after that we have yet another predominantly red symbol: a small pouch with gold coins in it. Last but not least, this brings us to the two guardian lion statues – naturally, also in gold. As for the layout, it features the customary grid of 5 reels and 3 rows, which you’re likely to see in just about any other slot. And there are 20 paylines here in total, but these are fixed. So you won’t be able to regulate them in any way. With that in mind, though, stakes here are still pretty flexible. You will be able to wager anything from only 20p per spin up to the maximum of £100 per single spin. The RTP you can expect in the long run is 95.98%.

The golden cat in this online slot game is the game’s Wild symbol. As such, it will be able to replace any of the other symbols in this game, save only for the Scatter. That way it can help create better winning opportunities for you. And on top of that, you can also expect to land the Wild in any position on the screen. Furthermore, this is also officially the highest paying symbol on the reels. In fact, it can potentially award you up to a whopping 10,000 coins! And even that doesn’t cover it all. As a matter of fact, the golden cat Wild will also be able to offer you an increasing multiplier on your payouts. The multiplier starts at 2x, but it could potentially rise all the way up to 10x. 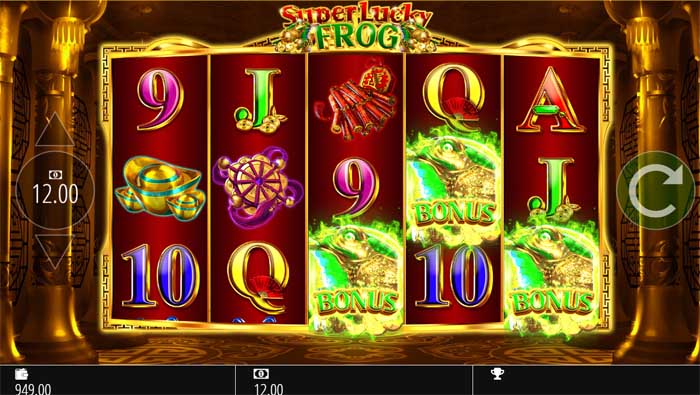 As for the game’s Scatter, it depicts a golden frog holding something in its mouth. Just like the Wild, it can appear in any position on the reels. However, it won’t be able to offer you any prizes. What it can do, though, is trigger this slot’s freespins bonus feature. And in order for that to take place, you will be looking to land a minimum of 3 Scatters anywhere on the reels. As a result, a new screen will appear, revealing 4 symbols for you to select from. Take your pick, and that symbol will show you how many freespins you have won. The number of freespins can be up to 20 at a time, but no less than 8. 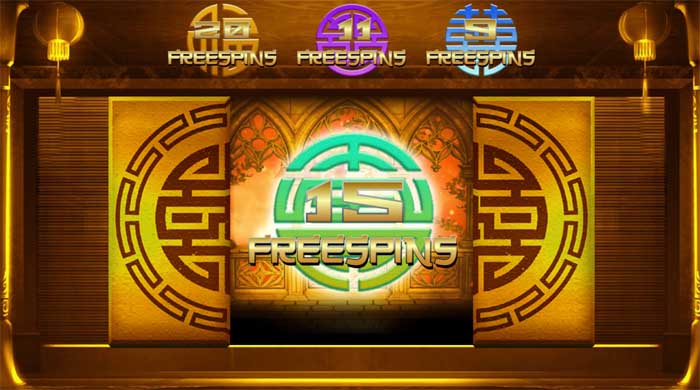 After this, you will proceed to the next screen to play your freespins. You can also retrigger this feature by landing another 3, 4 or 5 Scatter symbols. That way you will gain an extra batch of freespins on top of the ones you have remaining. But this about covers the special features that Super Lucky Frog has to offer. Nevertheless, it’s a fairly decent bonus round and you will also get the chance to trigger it relatively often. Put that together with the Wild multiplier and you can manage to scrape up some pretty impressive wins!

Super Lucky Frog is just what you might expect from a Chinese themed online slot game. The symbols, the colors and even the soundtrack are all very much in line with the tradition of this genre. But on the bright side, it’s fairly dynamic and the game’s visuals are of pretty high quality. In addition, the Wild multiplier makes for a very nice touch, as does the enticing freespins round. It also helps that you have a short pick me game before the freespins begin. All in all, it’s a nice low to medium variance slot game.