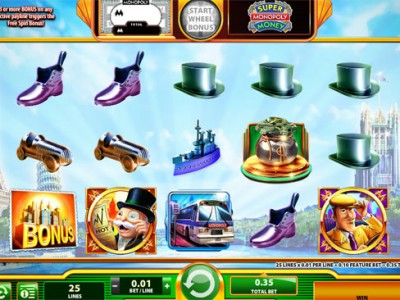 Monopoly is one of, if not the, most well-known board games in the world. For those who have played it, there’ll be familiarity with the playing pieces, all of which are included on the reels in the slot game. The car, the boat, the dog, the tophat, the shoe. All of them are incorporated into product, as well as various other icons, including a bag of cash, a black taxi and a large bus. The backdrop of the game features the Big Ben in London and the Eiffel Tower of Paris, offering up a worldwide appeal.

The game is a standard five reel, three row game, and also includes 25 separate paylines. The bet you can place per payline is able to be changed between the minimum of £0.01 and the maximum of £3.00, therefore offering a maximum overall wager of £105 per spin. This total also includes a £30 feature bet.

The symbol with the word, ‘WILD’ scrawled across it should be pretty self-explanatory. This will stand in for all other symbols on the reels to make a win, except for the bonus, MM bonus, MM wild and free parking symbols.

The MM wild is wild for all symbols, except for the free parking symbol only. This icon only appears on reel five, and it expands to fill the entire reel. Should a winning combination be created with this symbol included, an award is given in monopoly money as well as a monetary award. Should it not craft a win, a random amount of 10 to 1000 times the bet per line may be awarded in monopoly money. This monopoly money can be accumulated, and this can be spun on a wheel of fortune.

The free parking feature is triggered when one or more free parking symbols appears on the reels. This will either provide a win, trigger the freespins bonus round, or possibly increase existing wins. You simply need to pick one of five free parking symbols to reveal a symbol. These will always contain a wild, MM bonus, plus the three symbols that have landed on reel one.

The game also includes a bonus symbol, with three, four or five of these providing eight, 10 or 15 freespins, respectively.

This game is stacked full of added extras, making it not only a great base game to play, but it also provides a thrill whenever a special feature is triggered.