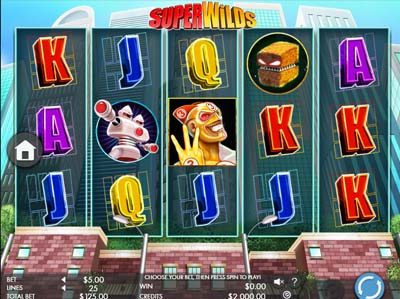 Super Wilds is a wildly fun game in a very comic book type of style by Genesis Gaming. It features aliens and weird creatures, who are apparently trying to take over the world. Laser animated sequences and other fun visuals are sure to please the eye. The backdrop displays several skyscrapers, to give us that big city feel. And the reels show us some futuristic, two-headed robots and terrifying giant monsters. Fun, fun, fun!

The RTP of this  slot game is 95.12%. The layout is 5 reels and 3 rows, with a total of 25 paylines. But, you may choose to modify those and use less paylines. You can do that in the game settings. You can start betting with as little as 25p and increase to a maximum of £125 per spin.

Super Wilds is called that for a reason: all the main characters of the game are different Wild symbols. There are four types of them and they all reveal their qualities during the bonus game.

There’s one bonus here and it’s the Superwild freespins feature. In order to trigger it, you will need to first land three Wild symbols simultaneously anywhere on the reels. Depending on which one of the four Wilds actually triggered the feature, it’ll have a different ‘flavor’, so to speak. All of this however will initially award you with 10 freespins.

First off, there are two multiplier men: the Doubler and the Tripler. The Doubler will multiply your wins twice throughout the duration of the feature. Likewise, the Tripler will triple your wins for that same period. Then we’ve go Expando-Man, the Expanding Wild. Can you guess what he does? You nailed it! He expands to all positions on the reel he lands on.

And finally, we can’t forget the Spin Twins that will award you an extra 5 freespins on top of the number you have left. All in all, these extra features can make for a decent payout of up to 500 times your initial stake. Not bad, we think.

And not bad, indeed, but it’s hard to really say much more than that. Of course, we were extremely pleased to see the perfect graphics and enjoy the awesome superhero theme that the developers have created for us. The layered bonus with its extra features is also intriguing enough to make you want to keep spinning. Just have to experience all those different Wilds. But apart from fun, we expect a game to also be at least somewhat lucrative, which we failed to see here.