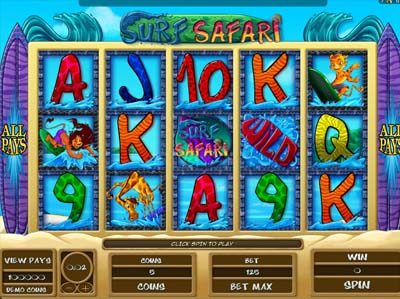 At first glance, Surf Safari provides a fun and cartoon take on animals oddly learning how to surf on wavy waters. However, whenever you spin the reels, there’s also the tones of a 60s guitar coming through the speakers, which gives it a bit more of an edge, and presents you with a nicely packaged game on the whole. As far as its icons go, you’ll find four different animals attempting to surf on the waters, with these being a giraffe, a lion, a tiger and a snake. These are accompanied by the standard A, J, K, Q, 9 and 10 symbols, while one or two other specialist icons have also been added.

The developer, Genesis, has added five reels and three rows for players to game on, and a total of 243 ways to win are also provided. Players are not able to alter this around as it’s a fixed part of the game, but what is able to be altered is the coin value and amount of coins wagered per round. The former of these is able to be changed from the minimum of £0.01 and the maximum of £1. The coins wagered per round is changeable between one and 10, which together with the coin value, provides the opportunity to bet up to £250 per round.

This product features several different specialities, which starts first of all with its wild icon. This is presented by a symbol with the word, ‘WILD’ appearing against a backdrop of splashing water. This will stand in for all other icons on the reels, except the scatters, in order to form a winning combination.

As far as the scatter symbol goes, this is represented by the game’s logo, and these icons pay out wherever they appear on the reels. Should five of these appear across the reels, you’ll receive a maximum win of £1250. Should you manage to spin three or more of these into view, you’ll activate the game’s ‘Safari Surf Wax Bonus’. A total of 15 Surf Wax will show up, and it’s your job to choose from these in order to collect prizes. If you select one that reveals a prize, this is added to the feature win. If a ‘Collect’ image is revealed, the session ends and your accumulated prizes are credited to your balance.

Surf Safari offers up a great game filled with imagery of the water sport, which includes great graphics and animations, as well as intriguing special features.