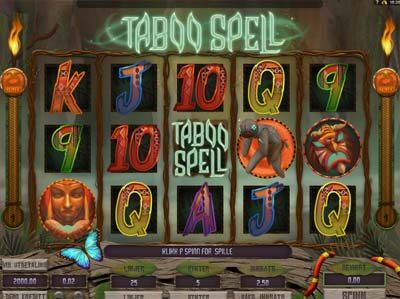 The game of Taboo Spell from Genesis takes on the theme of various different magical elements, such as voodoo and ancient Incan rites, to provide you with a game filled with spooks and intrigue. It’s set out against a backdrop of mist and deadened trees, with only a butterfly and a snake showing up in the front section. The symbols included on the game’s reels include various different nods to the taboo world of sorcery, including a voodoo doll, a tribal totem mask, the image of a woman readying herself to blow magic dust in your direction, a skull-topped staff, and the odd inclusion of a crocodile. These icons are all joined by the regular A, K, J, Q, 9 and 10 symbols.

Genesis have created this game on a five reel and three row layout, which offers up a standard video slot interface. There are a total of 25 separate pay lines included as well, which can be customised to suit your own personal preferences. Further to this, players can also change their bet amount per spin, which is done via the altering of the coin value and the changing of the amount of coins played per round. The first of these changes from its minimum of £0.01 up to its maximum level of £0.20 per active line. As far as the coins per spin, this can be switched between one and 30. This provides a maximum overall wager option of £150 per round.

The features in this game are a little bit different to many other products from this developer. In the first instance, this relates to its freespins, which can be triggered at random after any spin of the reels. You may end up seeing the witch doctor slide onto the screen from the side, and she’ll blow her magic dust across several of the icons, which will turn all tiki mask, crocodile and skull symbols into icons off herself. A total of six freespins will be granted.

Taboo Spell is able to provide a unique and original take on such a theme, incorporating intriguing graphics and wonderful specialities alongside.