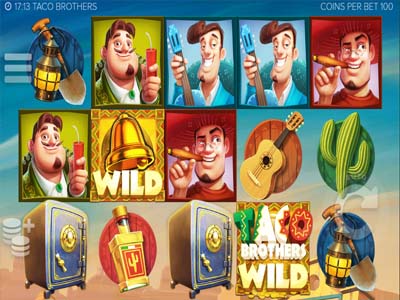 Welcome to Mexico, circa 1881 and more importantly, to the village of Santa Maria. There, tacos were served on a regular basis, until the invasion of the evil Captain Diaz. As the story goes, Diaz stopped tacos from being offered, upsetting an innocent child in the introductory video package. It then became time for the Taco Brothers to exact revenge on Diaz. So, join Paso, Pepe and Pico as they try to salvage the village’s notorious food item.

Taco Brothers features a five reel slot game, with a total of three rows included. There’s a stereotypical soundtrack to accompany you as you spin through the reels, but the graphics and animation included are second-to-none. There’s also 243 different ways to win across the reels, and wagers can be placed between the minimum of £0.10 and the maximum of £50 per spin. Alternatively, why not make use of the Elk Studios betting strategies, which allow you to wager predetermined amounts on every spin.

The bell symbol provides this game with its wild symbol, and this will stand in for other symbols to make a winning combination, except for the Safe and the Taco Brothers Wild.

Speaking of which, the Taco Brothers Wild is represented by the game’s logo, and should two of these symbols appear on the reels, they’ll start a re-spin for a second chance to collect three Safe symbols.

Should you manage to spin three Safe symbols, you’ll trigger the game’s bonus round, ‘Wild Escape’. This is the game’s freespins round, and during this, the brothers all drop one at a time on reel five, releasing running wilds. These move one reel per spin, from right to left, acting as a normal wild does. The only symbols in freespins that aren’t substituted are Captain Diaz and Senorita. When all the brothers have escaped, the freespins round ends. Should Diaz appear on the reels with his keys, he’ll imprison any running wild brothers. However, should the Senorita symbol appear, she’ll release any imprisoned brothers and restart the round, granting new freespins.

Taco Brothers is a wild and exciting game. The extra features, especially the freespins mode, make for an intriguing product overall.