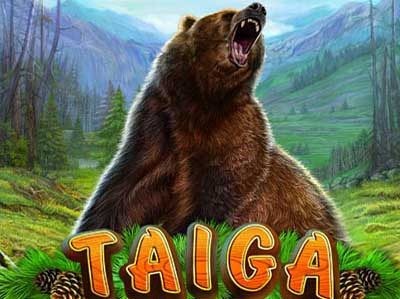 Taiga is a nature themed online slot game by casino software developer Playson. It has a nearly overwhelming soundtrack, which greatly influences the whole atmosphere. If it weren’t for the noises of the reels that kind of tend to undercut it, we might even say that this is among the best sounding games out there. Set in the midst of the vast taiga, the backdrop has a fantastic hand-drawn quality to it, as for most of the symbols on the reels. There are various wildlife representatives, such as foxes, wolves and squirrels. And in addition to them you will also get to see some of the typical taiga vegetation, like mushrooms, nuts and berries. Notice that the reels are actually formed by tree branches and have moss growing all around them. 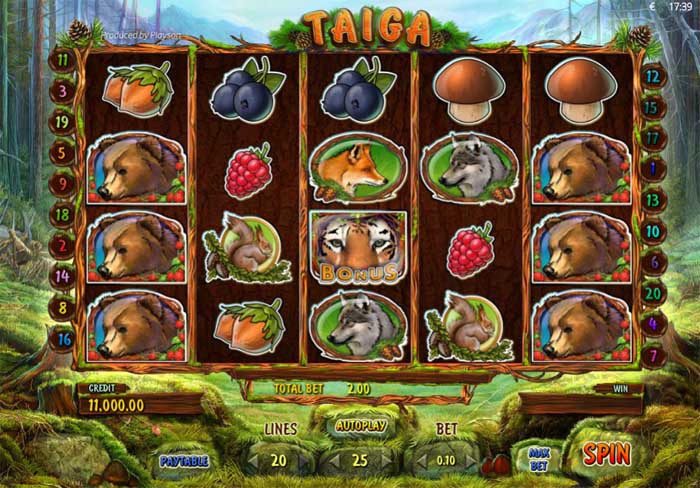 The layout here features 5 reels and 4 rows, with a total number of 20 paylines. The controls just below the reels will allow you to regulate that number if you so choose. However, if you play on the maximum number of paylines, the stakes start at 20p per spin. The maximum amount you will be able to wager here is £100 per spin. The RTP, though, isn’t as high as you might like it to be at only 94.98%.

We already mentioned that Taiga includes a number of wild animals on its reels. But we have yet to introduce and biggest and fiercest of the taiga’s inhabitants. First is the mighty brown bear, which represents the Wild symbol on these reels. As a Wild, it can replace any of the regular symbols here to help make winning sequences. In addition, it’s also the highest paying symbol here and can appear on any position on the reels. However, the Wild will not be able to substitute for the Bonus symbol. 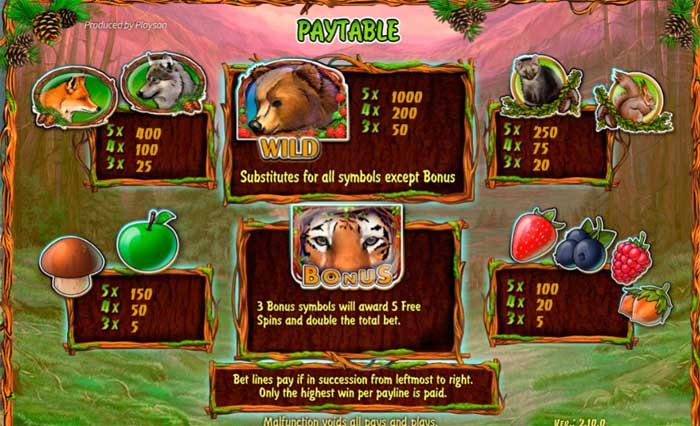 And the Bonus symbol comes in the form of the only predator that could possibly rival the bear – the Siberian tiger. It, too, can appear anywhere on the reels, so be sure to keep a sharp eye out for it. If you manage to land three or more Bonus symbols, you will trigger the freespins feature. As a result, you will receive a total of 5 freespins. You can also retrigger the feature and get another 5 freespins by landing at least 3 Bonus symbols.

And that’s not all the tiger Bonus symbol will do. Other than triggering the freespins bonus feature, this symbol will also offer you payouts of double your total stake amount.

Taiga is certainly a very scenic online slot game and the developers have done a great job in creating such a brilliant nature theme. The bonus features here may come across as a bit scant, with only those 5 freespins. But keep in mind that this is a highly volatile slot game. This means that wins might not occur often, but when they do – they’ll be big. That should also serve as a caution to watch out for your bankroll with this slot.