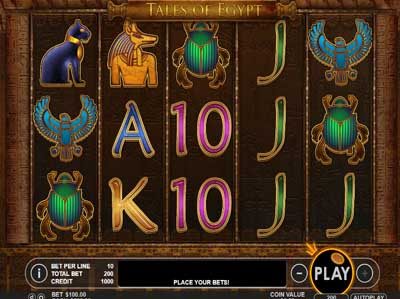 Tales of Egypt is a slot game by manufacturer Pragmatic Play. As is hardly a mystery, having in mind the title, the slot centers on the theme of Ancient Egypt. It’s a very popular theme among slot game providers and as it is custom, they usually all feature pretty much the same imagery. We must say that Tales of Egypt, however, provides a very decent design, offering a very authentic-looking backdrop. The soundtrack is also very nice, providing a subtle and mysterious flute melody. As for the reels, they picture the regular low value playing card symbols: A, K, Q, J and 10. In addition, you will also find some of the most iconic images, such as the dog and cat deities Bastet and Anubis. With them are the famous scarab beetle and the bird form of the Sun god – Bennu.

The layout is rather traditional, featuring 5 reels and 3 rows. There are 20 paylines, all of which are fixed. Players may, however, set the amount of coins they would like to bet per line, as well as the coin value. This makes for a betting range starting with 20p per spin and reaching up to £100 per spin. This slot also offers a rather low RTP of 91.93%.

The Wild symbol offers a rather interesting animated sequence within the symbol itself. It showcases an archeologist, who stumbles on a golden head of sorts, after which mummified zombie-pharaohs are shown. This is also the highest paying icon in the game, offering payouts of up to 1,000 coins. It also replaces all of the regular symbols, save for the Scatter, to help create winning sequences.

The Scatter, in turn, also offers a brilliant animated sequence of its own. It pictures the great pyramid and the morning star above it. After this, it momentarily sends you inside it, allowing a glimpse of all the treasures it hides. The Scatter also acts as a second Wild, meaning it can substitute for all of the symbols on the reels. No exceptions. You will be looking to land 3 or more Scatters on a spin to trigger the Raiding the Pyramid bonus feature. It will reward you with 10 freespins, before which a symbol will randomly be selected to act as a Scatter.

What’s more, though, you will also be able to retrigger the freespins feature. You will need to land another 3 Scatter symbols or more anywhere on the reels to receive extra freespins. And better yet, you can retrigger the feature and unlimited number of times.

Tales of Egypt offers a pretty unique take on an already overused theme. The high-quality animations certainly add to that, as does the overall design. The bonus feature is also a nice touch, however, it does tend to be rather elusive and can take a while before you actually get a chance to take advantage of it. A RTP of 91.93% is however so low that we would advise our readers from playing this slot machine for more than just a few spins.