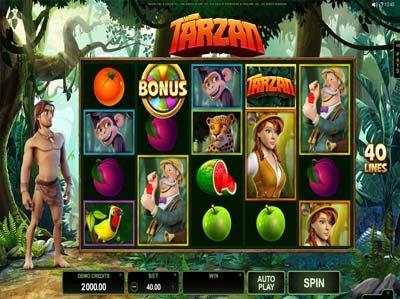 Jungle-themed slots aren’t exactly something new in the online gambling industry, but why not have a take at the classic novel in this Microgaming slot called Tarzan? We’ve all enjoyed a number of really grand products by this developer, but this one doesn’t seem to really live up to the standard. The childish graphics make you wonder whether this game was indeed intended for adults or it was ripped off the page of some children’s book. 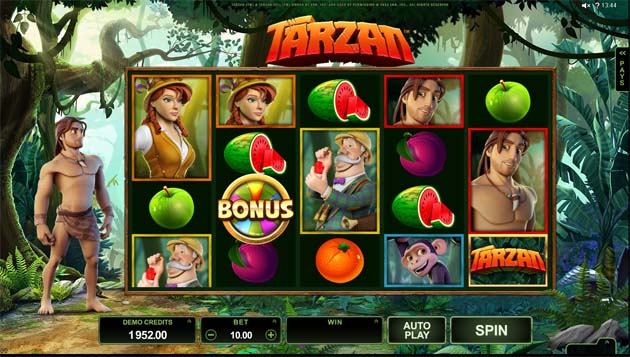 Tarzan, Jane and Archimedes are the main characters on the reels and can take up to two positions. Following them are a leopard and a chimpanzee, after which are all the lower value symbols, mainly showcasing different fruits. The Wild symbol on these reels features the game’s logo and will replace any of the lesser symbols on the reels. Naturally, this doesn’t apply to the Scatter.

In turn, the Scatter symbol is represented by a wheel and you can read the word Bonus on it. It can appear anywhere on the reels and will be responsible for triggering this game’s bonus feature. Once you’ve activated the feature, a new screen will display the Wheel of Fortune. It has four different prizes in store for you. First up are the multipliers, of which you can win anywhere from x3 to x18, depending on the number of Scatters that triggered the feature.

Next is the Pick-a-Potamus Bonus feature, which will open yet another screen with a bunch of hippos. Each of them has a cash prize and your goal will be to keep picking from them until the Collect option appears. The third prize on the Wheel of Fortune is the Freespins feature. It will grant you 12 freespins, during which symbols forming winning combos will explode and make way for new ones. The freespins also come with Growing Wilds, which means the Wild symbols will increase by 1 for every spin. This can grant you up to 15 Wilds on the reels by the end of the feature!

And finally, there’s the Jackpot. This feature will also depend on the number of Scatters you landed to trigger the bonus game. Based on that number, you can win a cash prize of 200, 400 or 1000 times your initial stake! The maximum possible win in this game is a total of up to 2,750 times your stake.

Well, despite the bonus game, we really can’t say this is our favorite Microgaming slot machine. And that’s to say the least. We already expressed our unhappiness with the graphics, but there’s also another thing that annoys us. After you have finally hit three bonus symbols, you are very likely to end up with an insignificant coin win. And nobody would want to spin hundreds of times to finally score a dismal win.