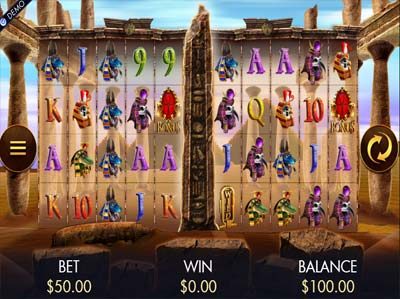 It seems like a common thing for game developers to have taken at least one of their products and based it on ancient Egypt. It’s no different for Genesis Gaming, whose slot game, Temple of Luxor, brings together all the wonder and mystery without omitting any of the fun and thematic features. The game itself is set at the entrance to a temple in the middle of the desert, and its reels are filled with various different Pharaoh masks, ranging from bird-headed ones, to crocodile ones. Alongside this, there’s a wonderful ditty of a tune that plays every time you secure a win, while the sound of sand being poured sounds as the reels spin.

The game features two sets of reels, both with five columns and four rows. When you spin them, the first set comes to a halt from the leftmost to the rightmost, while the second one mirrors that from the rightmost to the leftmost, with wins on each reel being calculated in the same way. There’s a total of 50 lines included in the game, and there’s the opportunity to be able to change your bet from the maximum of £100 to the minimum of £1 per spin.

Apart from the obvious two sets of reels being a special feature, there’s also a wild icon included in the game. This substitutes for other symbols on the reels, except for the bonus symbol.

Speaking of which, if you spin two or more bonus symbols on the left base game and two or more on the right base game at the same time, you’ll be rewarded with 11 freespins of the reels. The two sets of reels will connect together in this instance and become one great 10 reel, four row game. The central column will turn entirely into a wild icon, stretching from top to bottom.

It may seem as though this creation from Genesis doesn’t feature so many extras, but in the grand scale of things, it does. The freespins with the central wild make for a fascinating feature round, while the graphics and soundtrack incorporated into the product come together to form an all around wonderful game.