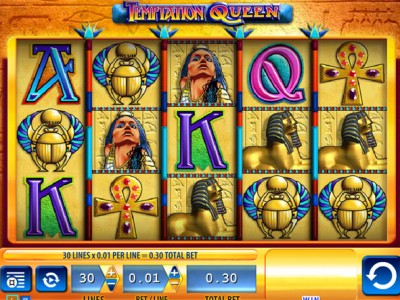 Temptation Queen takes on a very Egyptian theme, incorporating icons of the sphynx, scarabs, ankhs and bird-headed urns into its reels. Furthermore, the supposed Temptation Queen herself is also a symbol, offering up the highest standard payouts. You’ll also find generic A, K ad Q symbols making up the remainder of the icons in this one. However, as far as the icons stick to the Egyptian theme, the game’s soundtrack is anything but, and instead it takes on a very familiar piece of music while the reels spin.

Five reels and three rows make up the layout of Temptation Queen, while a total of 30 customisable paylines have been added to the game alongside. Coin values are able to be altered between the minimum of £0.01 per line and the maximum of £5.00. This allows all players to place a maximum overall wager of £150 per spin.

The icon of the Egyptian pyramid acts as the wild symbol in this game, and this will appear on reels two, three and four only. It will substitute for all other symbols on the reels, and should it be involved in a winning combination, it will then expand to fill the entire reel, offering up further chances of wins being created.

The cat sarcophagus is this game’s scatter symbol, and spinning three or more of these on the reels will activate the bonus feature. This provides eight freespins of the reels, and the expanding wild feature is also included in this round.

Temptation Queen isn’t really overflowing with special features, and the ones it does have are fairly substandard, save for the added perk of the wild expanding. It could also do with building around the Egyptian theme on the whole. However, other than this, it will provide a fairly decent five reel slot game to play.