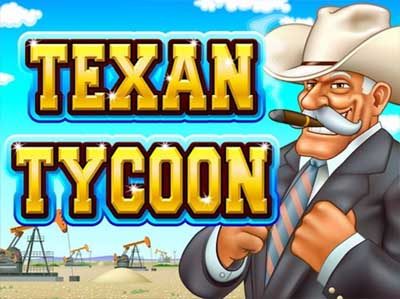 Texan Tycoon is an slot by online slot machine developer Realtime Gaming. How would you like to feel like you struck oil in Texas? Lots of oil, at that. Well, this RTG offering will provide you with a glimpse of what that may be like. Delve into the world of oil pumping, big trucks and stacks upon stacks of cash. This isn’t the latest online slot game out there, though. And you will probably be able to guess as much from the sight of the visuals alone. In addition to those, there’s no soundtrack that would accompany gameplay, except for the slightly annoying sound of the reels. And that’s another telltale sign. In the backdrop oil drilling and pumping is in full swing. There’s a large oil field extending as far as the eye can see. And above it is a clear blue sky. 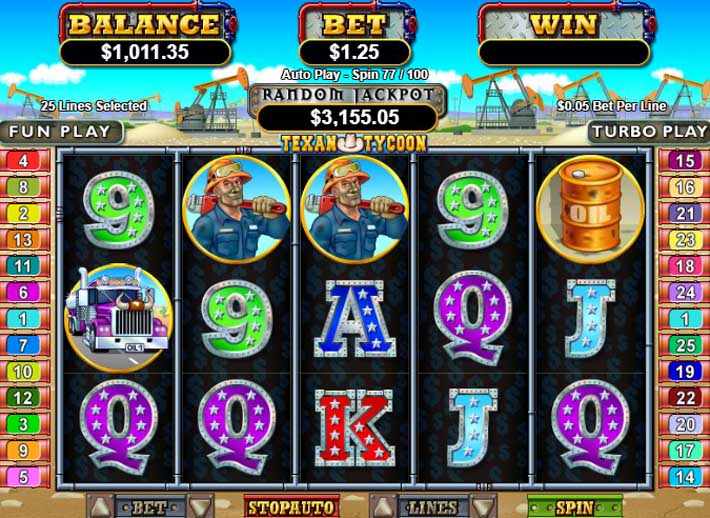 The symbols on these reels start off with the less valuable symbols. Each of these has a solid metal frame around them, too, along with metal stars decorating the body. Traditionally, each symbol comes in a different bright color, such as blue, red, green and orange. The symbols in question are A, K, Q, J, 10 and 9. And this leads us to the higher value icons on the reels of Texan Tycoon. There are only four of these and they all bear immediate relevance to the theme. In turn, they start off with a symbol depicting a barrel of oil. Next is a worker from the oil field, following whom we have a very large purple truck with horns in the front of it. Then last but not least is a pile of cash as the game’s most lucrative icon. It offers payouts of up to 1,500 coins. The layout in Texan Tycoon is no different from the majority of online slots out there. You will see it feature a grid of 5 reels and 3 rows, with a total of 25 paylines. You can regulate the number of paylines with the help of the up and down arrows below the reels. The same also goes for your desired betting amount. And stakes here span from 25c per spin to $6.25 per single spin.

One of the symbols you will really want to look out for on these reels is the Tycoon himself. He acts as the Wild symbol here, but doesn’t offer any payouts of his own. Instead, he can replace any of the other icons present and help complete winning combinations. And in addition to that, the Wild will also multiply the payouts for any winning combos by 2, 3, 5 or 10. However, you can only expect to see him on the middle reel 3. And the Wild cannot stand in for the game’s Scatter symbol. 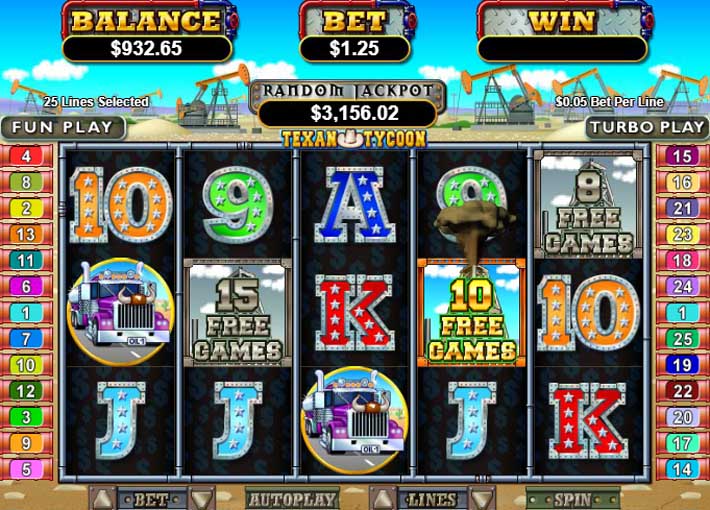 In turn, the Scatter comes in the form of an oil well. Unlike the Wild, it does have its own payouts and can actually appear in any position, on any of the five reels. More importantly, though, it will be able to trigger this game’s single special feature and main attraction. And by that we are referring to the freespins bonus feature. By landing 3, 4 or 5 Scatter symbols in any position on the reels you will activate the bonus. Select one of the triggering Scatters in order to reveal your number of freespins. It can be up to a maximum of 25. And better yet, all throughout the duration of the freespins, all of your winnings will be subject to a 3x multiplier! On top of that, you can also retrigger the feature. Just land another 3 or more Scatter symbols simultaneously during the same spin and you will receive even more freespins on top.

Last but not least, Texan Tycoon also comes with a Progressive Jackpot. Its amount is on constant display and in real time just above the reels. So, you can monitor it all throughout gameplay. It is awarded completely at random after any given spin. And it doesn’t matter whether it was a winning or a losing one either. So that’s also something to potentially look forward to if you decide to play this game.

Texan Tycoon is a very simplistic title, with no complications or elaborate features to distract you from gameplay. There’s only a single special feature, namely the freespins bonus round. And it can make for fairly satisfying prizes, mainly thanks to the 3x multiplier that comes with it. But the Wild symbol can also offer some pretty handsome rewards of its own, especially if you get to pair it with the higher value icons and manage to get a bigger multiplier. As far as the variance here goes, we would put it in the low to medium variance range. So triggering the feature won’t take long at all.