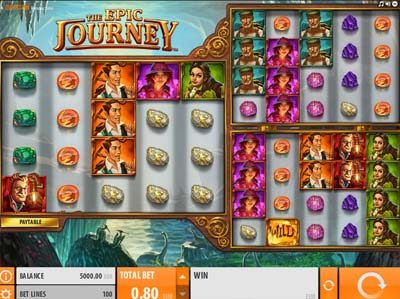 It’s time to go on a epic journey and explore the unexplored, discover the undiscovered and tread the untrodden road with this wonderful game from Quickspin. If the epic music isn’t enough to completely envelop you in this game, the overall gameplay, graphics and special features should keep you involved for a long time. On the reels, you’ll find symbols of various different articulately designed gemstones, as well as five icons of various different explorers.

There are three separate reel sets included in the game, all of which have five reels and four rows worth of an interface. There’s also a total of 100 bet lines included in the game, and the coin value is able to be altered between the minimum of £0.01 and the maximum of £1.00. This allows a maximum wager of £80 to be placed on each spin.

The game includes a regular wild symbol, and this will act as a stand in for all other symbols to create a winning combination, except for bonus scatter symbols, volcano wilds, freespins mammoth wilds, freespin sea creature wilds and freespin T-Rex wilds.

There’s also a bonus pick screen, triggered by three bonus scatter symbols. Here, you need to a pick a rune stone to get either the Safari Freespins Bonus, the Fossil Hunt, the Mushroom Forest or Coin win.

When the Safari Freespins round is triggered, you’ll be given 10 freespins. Mammoth Wilds, Sea Creature Wilds and T-Rex Wilds can appear on each of the reel sets, and will substitute for all symbols, except the Volcano Wild.

The Mushroom Forest allows you to pick three mushrooms from various different ones for multipliers and/or extra picks. In the Fossil Hunt the goal is to collectcollect as many shovel symbols as possible during three free spins. The shovel symbols reveal fossil parts and will lock in place for all the remaining spins.

The Epic Journey is exactly that, an epic game, which is filled with a variety of symbols and excellent added features.