The Forgotten Land of Lemuria 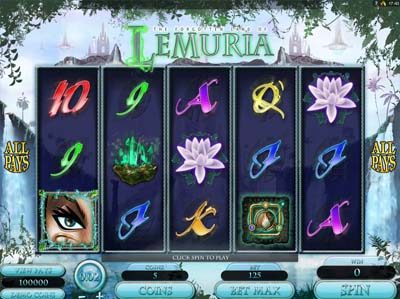 Lemuria is the name of a hypothetical ‘lost land’, which is supposedly located somewhere across the Indian and Pacific Oceans. The land stems from 19-century origins as an attempt to account for discontinuities in biogeography. Such theories have since been rendered obsolete, but the myths and legends relating to it still exist. In fact, Genesis have created this product based on the continent, and have designed it as a land of wonder, awe and intrigue. The reels of the game feature various different icons, including water lilies, vibrant green crystals, a translucent blue skull, and one or two other symbols alongside.

The game itself provides five reels and three rows, and Genesis have also added 243 ways to win to the product as well. These cannot be customised, although you can change around the amount you wager per round. This starts with the coin value, which begins from its minimum of £0.01 and an be increased up to £0.50, while the amount of coins wagered per round are changeable between one and 10. This allows a maximum overall wager of £250 per spin to be placed.

The Forgotten Land of Lemuria features its own wild symbol, which is represented by its logo. This will stand in for any other icon on the reels in order to create a winning combination. The exception to this rule is the scatter icon.

And speaking of the game’s scatter, this is represented by the close up shot of a woman’s eye. These symbols offer a pay out wherever they appear on the reels, and if you manage to spin three or more of these, you’ll trigger the ‘Treasure Vault’ feature. This presents you with three different treasure vaults – water, earth and fire. You begin at the water treasure vault and progress through to the other two, respectively. In each vault, you choose from 10 orbs, one at a time. Each vault reveals either coins, or in the case of the first two, an advance on to the next vault.

This game brings a whole new imagining of Lemuria, and presents it in an intriguing game. The graphics aren’t as crisp as what one would hope for, but putting this aside, it does provide many hours of entertaining game play.