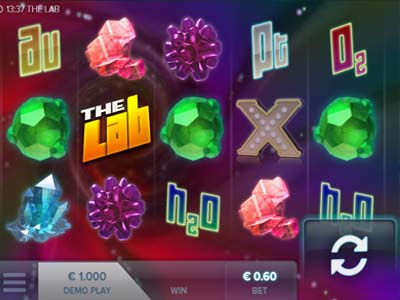 The Lab slot game takes you into a warped world of science and space, complete with weird and wacky background music. You’ll find that the reels are filled with various different chemical compounds, such as H20 and O2, as well as symbols of various elements, like PT and AU. Accompanying these icons are various different crystals, ranging in colours from red, to blue to green.

Offering up a five reel and three row interface, The Lab sounds like a fairly generic slot game. However, look past its layout and you’ll find something much more interesting. There’s a total of 15 paylines included in gameplay, and all gamers have the chance of placing a wager that lies between £0.15 and £90 per spin. If you’ve played Elk Studios games before, then you’ll be aware that there’s also the option of choosing one of the predetermined betting strategies that are included with their games.

During the main game, if you spin the game’s logo on reel two over the swirling vortex, you’ll trigger the sliding reels and begin the freespins round. During this round, you’ll find the Lab Wild symbol, which will substitute for any other symbol appearing on the reels to create a win.

There’s also the ‘X’ scatter symbol, which will multiply the win by times two for every visible symbol.

While the special features of this particular game can’t really be compared to the vastness of those included in other Elk Studios slots, The Lab does provide a thoroughly entertaining and intriguing product in itself. If you’re a fan of space, time and science, then it will most surely prove to be an attractive option. The warped music and inclusion of freespins do add extra benefits to this game, as well.