The Legend of Olympus 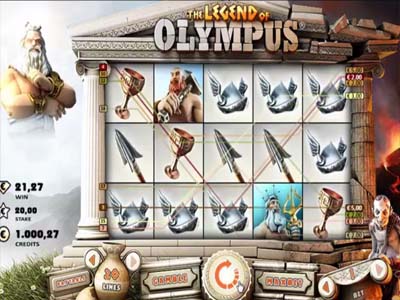 The Legend of Olympus Slot Review

The Legend of Olympus slot game is based on the theme of Greek Gods and Mount Olympus. Now, you may be thinking that game developers have used the theme of ancient Greece to its death, but this particular product is something a little different. Not only is it visually and graphically appealing, but it takes the theme and puts it into its best output, slot game wise. It’s set inside a seemingly ruined temple, and Zeus stands watch over your gameplay to the left of the reels. Meanwhile, Hades sits scowling at the bottom right of the temple.

The slots themselves are made up of five reels and three rows, and contain such symbols as spears, chalices, helmets, shields, and other imagery relative to ancient Greece. There’s 20 customisable paylines included in the game, and the coin value can be changed between the minimum of £0.01 and the maximum of £2.00 per line. Therefore, players are able to wager a maximum amount of £40 per spin.

Hades acts as the game’s wild symbol, and it will replace all other symbols on the reels in order to complete a win, except for the freespins or bonus symbols.

The freespins symbol is represented by Zeus, and it acts as a scatter symbol. Spinning three or more of these on the reels will trigger the freespins bonus round. Once this round is activated, Zeus will thrust a lightning bolt towards Hades to reveal the number of freespins you’re awarded.

The Legend of Olympus is an intriguing game that takes the ancient Greek theme and pumps out a well-rounded and exciting product.