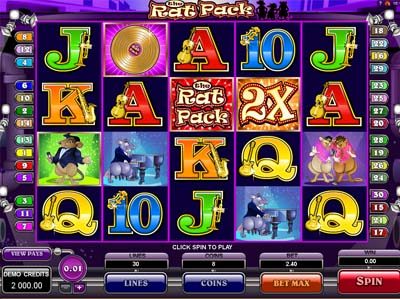 What do you get when merge a group of rodents with a well-known and respected group of singers? You get a literal incarnation of The Rat Pack, with the furry, long-tailed animals taking on the form of a crooning band of singers. The game takes place within a vibrant club, and you’ll find that the reels incorporate various different icons, starting with the standard T, J, K, Q and A symbols. These are joined by icons of a rat on the piano, two female backing singer rats, and three other icons, each of a rodent holding on to a microphone.

You’ll find that there’s a total of five reels and three rows incorporated into the layout of this game, and Microgaming have also added 30 separate pay lines. These can be customised by clicking on the ‘Lines’ button or by utilising the numbers down either side of the reels. Furthermore, there’s the addition of the ability to customise your wager per spin. The value of a single coin is changeable between £0.01 and £0.50, while the amount of coins you can wager per line is able to be changed between one and 10. Therefore, a maximum overall wager of £150 can be bet per round.

The first of this game’s special features is its wild symbol and this is represented by its logo. As a wild icon, it will substitute for any other symbol on the reels, with the exception of the alternative wild icon and the scatter icon. Should five of these show up on a payline, you’ll win the maximum pay out of 5,000 coins.

Included alongside the standard wild, there’s also the addition of the double wild, and this is the icon showing the ‘2X’ image. It works in the same way as the standard edition wild, substituting for all other symbols except the scatter, and if it is included in a win, it will double your pay out.

Finally, the incorporated scatter symbol is the gold vinyl record icon, and this one will pay out no matter where it lands on the reels. Should five of them come in to view, your wager placed will be multiplied by a total of times 100. If three, four or five of them show up, you’ll be taken to the freespins round where only scatter icons provide pay outs. This round ends when no further scatters show up on the reels.

The Rat Pack from Microgaming is definitely a very exciting and entertaining game to play. It merges two different themes in to one, and does it in great style. Special features and graphics are of very high quality as well, so you’ll be sure of playing a great product on the whole.