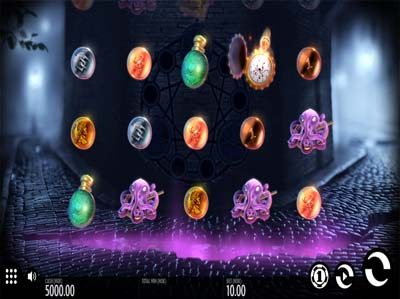 The Rift takes you to some dark, cobbled streets, and there’s a central wall that has what appears to be some sort of cryptic element marked into it. The reels of the game offer up various different icons, starting with four different coins – a copper one, a bronze one, a silver one and a gold one. There’s also the addition of what looks like a green perfume bottle, and this is joined by the purple octopus, the golden watch and the ancient tome book. These have all been designed in a graphically superior way, offering up a visually stunning game.

The game has been designed by Thunderkick, and the developer has formed this one on a five reel and three row layout. There are also 17 separate pay lines incorporated into the game, although these cannot be adjusted in any way. However, you can change around the amount of the wager that you place per spin, and to do this you simply need to press on the current bet amount, which will bring up various different amounts to choose from. The minimum for this is £0.10 while the maximum stands at £100 per round.

There are a couple of special features included into this game, and the first of these is the wild icon. This can substitute for any other symbol on the reels, except for the bonus symbol, in order to form a winning combination. The wild is also sticky during the Rift spin feature and in the bonus game, meaning that when it appears and forms part of a win, it will stay around in the same position.

The game’s bonus icon is presented in the form of its logo, once you spin two of them onto the reels in any location, you’ll activate the Rift spin feature. This fixes any wilds in place and adds between one and three more sticky wilds onto the reels.

If you spin three or more bonus icons onto the reels in any location, you will activate the bonus round of freespins, with three giving you 10 freespins, four offering up 15 freespins and five providing 20 freespins. Each bonus icon showing on the reels during this round activates a single step on the Rift seal. Every third step grants an additional two freespins.

The Rift is a great product for gamers to play, featuring high quality graphics and exceptional special features alongside.