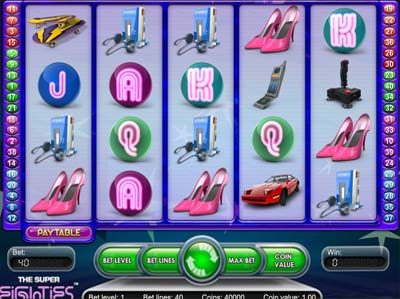 If you were alive during the 80s, this slot game from Netent will definitely provide you with a blast from the past. It takes you right back to the era of big hair, large shoulder pads, a technology revolution and one of the best ages of music in history. As such, you’ll find that the reels of this one come complete with various different theme-relative icons, and these start with the A, J, K, Q icons that are frequently seen in online video slots. Alongside these are six different symbols which relate to the Eighties, and these are a funky skateboard, a pair of pink stilettos and a computer joystick. The remaining three are a cassette playing walkman, an early mobile phone, and a flashy red sports car.

As far as the interface of the game is concerned, it provides players with a five reel and four row layout, and Netent have also added a total of 40 separate pay lines alongside this. However, you are able to adjust the amount of active bet lines, which can be changed by pressing the ‘Bet Lines’ button, or by clicking on a number down one of the sides of the reels. Not only that, but the amount of the wager that you’re able to place per round can be changed by switching around the coin value between £0.01 and £0.50 per line. And further to this, you can change the bet level between one and five, which provides you with the maximum overall bet of £100 per round.

As far as the specials of this game are concerned, you will be able to see the wild symbol on the reels in stacked format, and this is represented by the symbol stating the words, ’80s Wild’. As a wild, this will stand in for any other icon on the reels in order to form a win, except for the scatters.

And speaking of the scatters, this is represented by the retro Eighties girl, and you’ll need to spin three or more of these on to the reels in order to activate its special function. Three scatter symbols will pay your total bet multiplied by two, and they’ll also provide you with five freespins of the reels as well. Freespin wins pay out wins multiplied by two as well.

As a game in this specific series (which features The Funky Seventies and The Groovy Sixties), this is one of our favourites due to the hints of nostalgia it rears. It’s got intriguing special features and the inclusive music is also very compelling and appropriate.