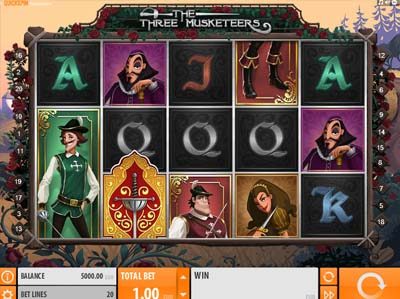 If there was ever a more entertaining and compelling introduction to a slot game, The Three Musketeers has it. And in this game, you’ll get to follow the adventures of Athos, Porthos and Aramis as they join up with D’Artagnan on their perilous journey to find the grand prize of the Queen’s Diamond. As such, this game presents reels filled with riches of gem-studded crowns, crossed swords, rapiers, and various musketeer attire items, such as gloves and pouches. The game also features an amazing soundtrack to assist you on your gameplay.

The main game features five reels and four rows, as well as a total of 50 customisable paylines. Alongside this, the coin value can be changed from the minimum of £0.01 up to the maximum of £1 per payline. Therefore, a total overall wager of £100 per spin can be placed by all players. There’s also the option of activating a turbo mode feature, which spins the reels faster.

There’s a wild symbol included in the game, which is stacked and appears on the middle three reels only. It will substitute for all symbols, except those of the musketeers and the free games icon.

Each of the musketeers acts as a scatter symbol, and three of these appearing on specific reels with a weapon to his immediate right triggers Mighty Musketeers Features. Porthos appears on reels two, three and five, and if he has a sword to his immediate right, a re-spin is awarded with an entire reel covered with wilds. Athos appears on reels one, two and five, and crossed muskets to his right awards a re-spin with wilds randomly distributed on reels two, three and four. And Aramis on reels three, four and five, with daggers to the immediate right of him will allow you to chose one of two bags of gold to win a cash prize.

The free games icon appears on reels one and five, and for each symbol appearing simultaneously on them, you are awarded three freespins.

Finally, D’Artagnan appears on reels two, three and four, and this will trigger the Queen’s Diamond bonus game.

The Three Musketeers is a very entertaining game from beginning to end and will offer up a multitude of extras along the way.