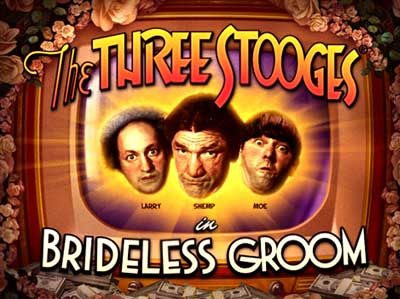 The Three Stooges in Brideless Groom is an online slot game by software provider RTG. And it’s also very high up on the list of this developer’s most visually satisfying offerings. Not everyone might remember the classic 1940’s film The Brideless Groom, but all will be sure to enjoy this masterpiece of an adaptation. First of all, before the game actually loads, you will see it as an old TV set. And you will be greeted by a very fun, typical for that time jazzy soundtrack. It will continue on throughout gameplay as well. As for the backdrop of the slot game itself, you can see the interior of a 40’s home, with a grand piano and massive wood cabinet. The color scheme is also quite subdued, in unison with the theme. The symbols are also very charming, as you will soon see. Some come directly from the movie, whereas most just include 3D depictions of vintage imagery. 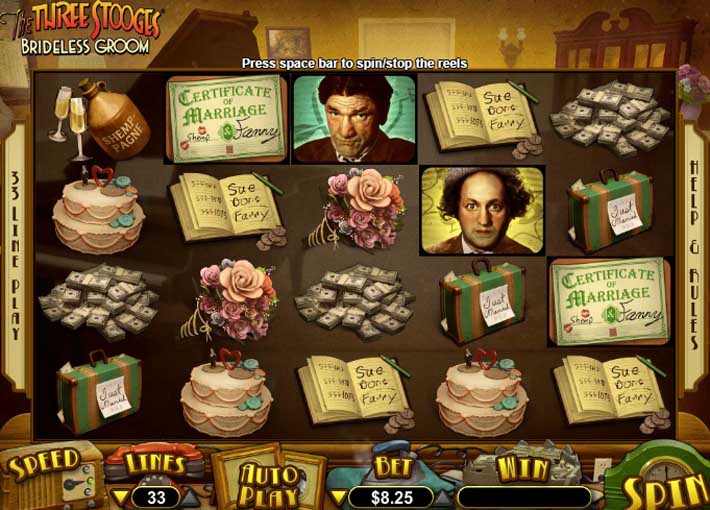 Thus, the lower value icons on these reels include a notebook with women’s names and phone numbers. Next is a lovely bouquet of pastel colored flowers, following which is a jug of champagne and two champagne glasses. After that we have a suitcase with a note on it saying ‘Just Married’. Then there’s a wedding cake with only the figurine of the groom on top. Rising up in value, we have a symbol with a large pile of cash, following which is a marriage certificate. Then this brings us to the three higher value character symbols, namely the Three Stooges. They are Larry, Shemp and Moe. As for the layout in this title, it’s slightly less conventional than what most slots offer. It has a grid of 5 reels and 4 rows, instead of the more common 3. On top of that, there’s also an unusual number of paylines available – 33. However, you can easily regulate these and adjust them to whatever number of paylines you are more comfortable with. Likewise, stakes here will span from a minimum of 1c per single spin. And the maximum possible bet will set you back a total of $8.25 per spin.

The symbol depicting all Three Stooges at the same time is the game’s Wild. It also happens to be the highest paying icon on these reels. In fact, it can award players up to a whopping 3,333 coins. The Wild will be able to replace any of the other icons on the screen. And in doing so, it will be able to help complete winning combos and increase your winnings. You can also expect to see it in any position, on any of the 5 reels. However, the Wild cannot replace the game’s Scatter symbol. The Scatter, in turn, comes in the form of two wedding rings and can also appear just about anywhere on the screen. But it doesn’t offer anything in particular besides just the scattered payouts.

There’s also another feature the Three Stooges Wild and the separate Stooge symbols participate in. If you can fill a whole middle reel or even 2 middle reels with Wilds or Stooge symbols, you can trigger 1 or 3 respins, respectively. Furthermore, if you had covered just 1 reel and as a result of the respin covered a second one, you will receive 3 more respins. And if you cover all three middle reels (2, 3 and 4), you will activate the Stooge Picks feature.

You will need to keep picking TV sets with the Stooges, until you reveal 2 parts of the broken heart. In the meantime, you can unveil freespins, Whacky Wilds and multipliers. The Whacky Wilds will turn the separate Stooge symbols into Wilds when they appear on the middle reels.

Last but not least we have the Lucky Stooge Spins as perhaps the most attractive of the special features. You can trigger it randomly after any spin and it will award you anything from 9 to 33 freespins. And any winning combinations that include a Wild during this feature will also benefit from a 3x multiplier! Furthermore, you can also trigger the other special features from the freespins round, too. You can gain Stooge Picks, which can add more freespins and a bigger multiplier. And you can also enjoy the Stooge Respins as well.

The Three Stooges Brideless Groom is great fun and has much to offer players. Besides the amazing visuals and really cool atmosphere, there are plenty of features to take advantage of. It may perhaps be a little unusual that you can only trigger the freespins randomly. But it can prove to be a very rewarding feature, nonetheless. Especially if you manage to make use of the pick-me game and respins at the same time, too. The variance of this RTG title is medium, though, so you won’t have to wait too long before you can trigger the bonus.