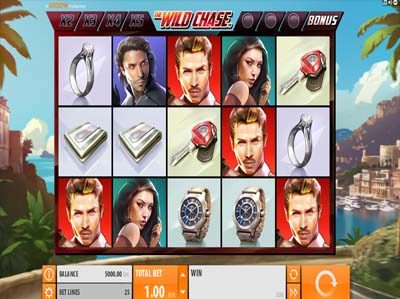 It’s time to chase down the thieves who have made off with numerous pieces of jewellery with this offering from Quickspin. This one will see you act as a James Bond-like character, trying to put the world to rights by bringing some criminals to justice. This all takes place against a background of blue waters and old buildings, and in the centre of the interface is the set of reels. It’s there that you will find the various different symbols, which begin with five different items that have been stolen – a bag of diamonds, a car key, a silver watch, a diamond ring and a wad of cash. Following this, four icons of different thieves are also present.

The aforementioned reels stand at five reels and three rows large, and Quickspin have also added a total of 25 different bet lines. These are not able to be adjusted in any way, but players can change around the total bet that they place. This offers up a range of between £0.25 and £100 per round, and there’s also the addition of an ‘Autoplay’ button. This allows you to spin the reels up to 1,000 consecutive times at the same bet level.

There’s also a Multiplier Wild Feature involved in the game, and if one of these symbols becomes a part of a winning combination, it will award a multiplier at the same time.

The game also offers up a freespins bonus round, triggered by the ‘BONUS’ symbol. You’ll receive 10 freespins when three or more of these have been collected in a single game round. And furthermore, each spin during the freespins round have one guaranteed multiplier wild symbol included.

We actually really enjoy this game. It’s got all the thrills of an adventure and mystery thrill movie, whilst also containing some appealing special features at the same time.