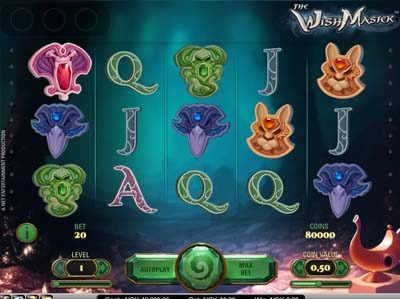 Do you want a chance to make all your dreams come true? If so, then you might be in for a treat when you play the online video slots entitled The Wish Master. The game is presented by Netent, and as such, it includes very high quality graphics and animations. The reels are filled with a variety of different icons, and these start with the standard A, J, K and Q symbols. In addition, you’ll find that there are four ornamental animal icons included on the reels,, and these exist in the form of a raven, a scorpion, a lynx and a fanged cobra.

Playing the game will present you with five reels and three rows worth of a layout, and this is joined by a total of 20 different bet lines. You’re not able to customise these in any way, but you do have the chance to customise the amount of the bet you place per spin. This is done firstly by adjusting the bet level of the game between one and 10, and you’re also able to change around the value of a single coin between £0.01 and £0.50. Should you choose to push all of these up to their highest values, you’ll be playing a maximum overall wager of £100 per spin.

This game’s main special feature is its ability to let a genie lose on the reels. This is triggered whenever a scatter symbol – represented by the scroll with the lamp on it – shows up anywhere on the interface. This sees the genie float out of his lamp and also gives you a total of 10 freespins. As it does, it will provide a random additional feature. There are various ones of these included, and this begins with the ‘Extra Wild’ option.

In addition to the extra wild, players can activate the ‘Wild Reel’ feature, which sees an entire reel filled with wild icons. There’s also an ‘Expanding Wild’ possibility which sees any appearance of a wild icon automatically expand to cover the entire reel. As well as this, a ‘Multiplier’ can also be triggered, and this sees all bet line wins multiplied by either times two or times three. Finally, there’s the possibility of being given the ‘Random Wild’, and this will see each spin accentuated by two floating wilds appearing in random locations.

The wild symbol of the game will stand in for any other icon on the reels in order to form a winning combination, and these can appear anywhere. The only symbol it won’t stand in for is the scatter icon.

The Wish Master is one of our favourite Netent games. It’s a great themed product and its special genie feature is definitely something to be impressed by, thanks to the random feature it can trigger.