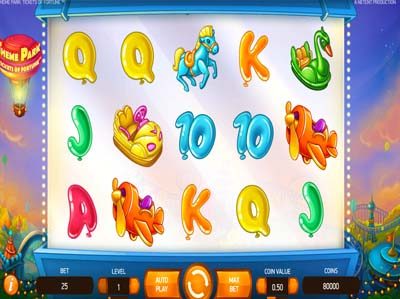 If you’re a fan of theme parks, then this game from Netent will definitely appeal to you. It takes you right into the heart of the park, where you’ll be able to see attractions, rides, souvenir shops and more. Everything is presented against the sounds of guests enjoying their time there, as well as a quirky piece of fairground music. The icons which have been added to the reels are presented first and foremost as the regularly seen A, J, K, Q and 10 symbols, although these have been designed to resemble balloons. These are joined by five icons of different rides – a carousel horse, a swam-shaped pedal boat, a bumper car, a flying plane and a rocket ship.

The game takes place on five reels and three rows, while Netent have also added a total of 50 pay lines alongside this. You’re not able to adjust this particular feature of the game, but you can switch around the bet that you’re able to place per spin. This begins with the ability to change your coin value between £0.01 and £1.00 per line, while the bet level can be altered between one and 10. A maximum of £250 can be played per round.

While playing this game, you’ll find that there are various different special features incorporated into it. This begins with the stacked wild icon, and this is represented by riders in rollercoaster cars. This can appear on reels two, three and four only. As a wild, it will substitute for all other icons on the reels in order to form a win, except for the scatter symbols, the bonus symbols and the claw symbol.

During the main game, the claw icon appears only on reel five. When it does, it will catch a toy from underneath the reels and a cash price is subsequently awarded to you. This can be between two and 15 times your total wager placed.

There are scatter icons involved in the game as well, and this only appears on reels three, four and five. Should you manage to spin three in to view, you’ll activate the Ticket Game round. In this, you’ll win tickets by stopping the Ticket Wheel. These will allow you to enter the Theme Park Map to play one or several bonus games, with each one costing a certain amount of tickets.

This one is very much filled with bonus rounds and specialities, and it’s all incorporated so as to provide a thoroughly entertaining round of game play.