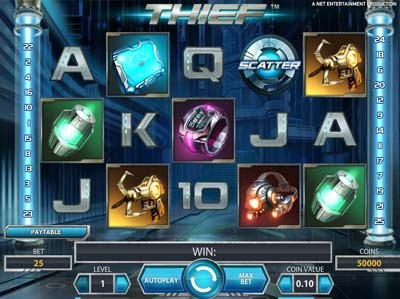 Do you ever wonder what it would be like to be a covert thief, creeping in and out of shadows and getting ready to dive in and grab your target? Well, you can have a little glimpse into such a world with the slot game, Thief. The game features various different futuristic operations equipment, ranging from touchscreen wristwatches and target maps, through to grappling guns and bombs, putting you right into the middle of the action.

The main game itself is presented as a five reel, three row slot, and a total of 25 paylines are also included. The bet level can be changed between one and 10, while the coin value gives the option of being altered between £0.01 and £0.50 per line. Therefore, a maximum wager of £125 is able to be placed per spin. Autoplay allows up to 1,000 spins of the reels at the same wager level.

Reels two, three and four can play host to the expanding wild symbol, which is represented by the thief in action, scaling a wall. These stand in for all other icons on the reels, except regular scatters and adrenaline scatters, and will create a win if able.

Thief is a great game to immerse yourself in, with thrilling music, wonderful extras and beautiful graphics.