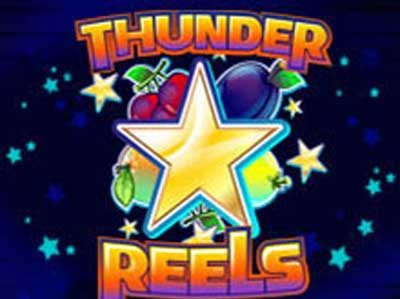 Thunder Reels is a retro themed slot game by casino games and slots manufacturer Playson. Even if you’re not really a fan of classic slot machine themes, the graphics and the soundtrack in this game are sure to convert you. Thunder Reels features a very upbeat 80s track, which really brings gameplay here to life. As for the graphics, they’re of fairly high quality and depict the most basic slot machine symbols. You will be sure to recognize all the fruit icons, such as the cherries, oranges, lemons and plums. But there are a few more traditional symbols, such as the BAR and lucky number 7s, as well as the gold stars. Typically for games in this genre, the backdrop is also very simplistic and here it’s just a deep blue with thin lightning bolts visible in the distance. 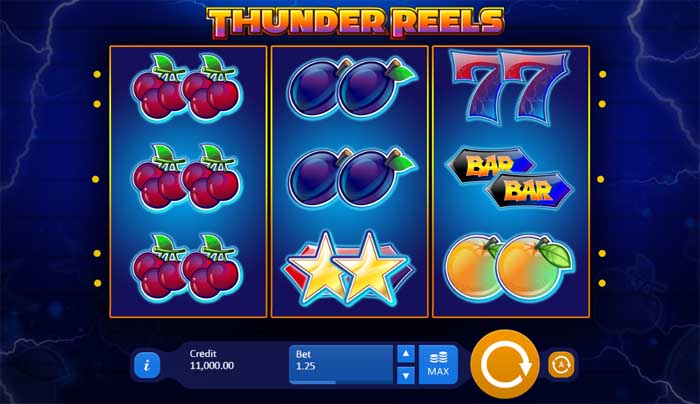 The layout here pays tribute to that of old school slot machines and features only 3 reels and 3 rows. There are also only 5 paylines here and you won’t be able to adjust their number. Stakes, however, start conveniently low at only 25p per spin, making this a good range for any pocket. The maximum amount that you will be able to wager, though, isn’t too high at £25 per spin. And the average RTP in Thunder Reels is 96.13%.

As is most commonly the case with vintage style slot games, they don’t really exhibit any elaborate bonus features and don’t tend to have any real special symbols in store. That’s also the case with Thunder Reels, so there won’t be any exciting bonus rounds or freespins to benefit from.

However, while some players may find this to be boring and not rewarding enough, others see this as an opportunity to really concentrate on gameplay and nothing else. And concertation really is advisable on these reels. Due to the game’s pretty high variance, you should be careful with your bankroll, because it can be gone fairly quickly. But with enough patience and good management, the rewards can be equally rewarding.

The symbol you want to keep an eye out for most is 77 – it’s by far the most lucrative here. There is, however, one little extra feature that you can enjoy in Thunder Reels. It’s the Gamble feature, which will allow you to increase your winnings after any successful spin. By choosing to gamble your prize, you will enter a simple side game of double or nothing. The objective is to correctly guess the color of the top card, which can either be black or red. Thus, you will have a 50/50 chance of either doubling your amount or losing it altogether. Alternatively, if you’re feeling very adventurous, you can try and guess the suit of the card and quadruple your amount.

Thunder Reels can prove to be a whole lot of fun. The quality graphics and soundtrack certainly make it appealing. But the overly simplistic gameplay and high winning opportunities are really what it’s about.