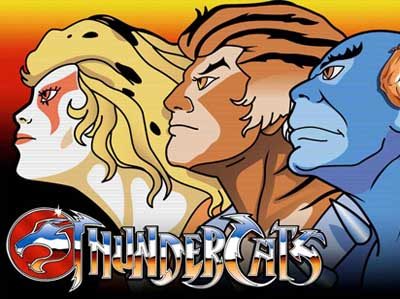 Thundercats is an online slot machine created by the game developers at Blueprint Gaming that’s based on the famous 1980’s kids’ show of the same name. Likewise, the style of the graphics, the characters – everything is pretty much from that time and that show. The game even has the exact same logo, and there’s a funky, dynamic (very 80’s) soundtrack to go along with all the action. We have to warn you that it may get a little bit much after only a short while. In addition, there are a bunch of extra sound effects, such as the laughter of some of the villains or some key phrases of the heroes, etc. Either way, the mute button is never too far away. But let’s also not forget the distinct comic book feel of the graphics, which is also pretty cool. If you watched this show as a child, you will probably be thrilled by this very lively throwback. But if you haven’t, you’ve probably seen a fair share of really similar shows, so you might still appreciate the nostalgia. 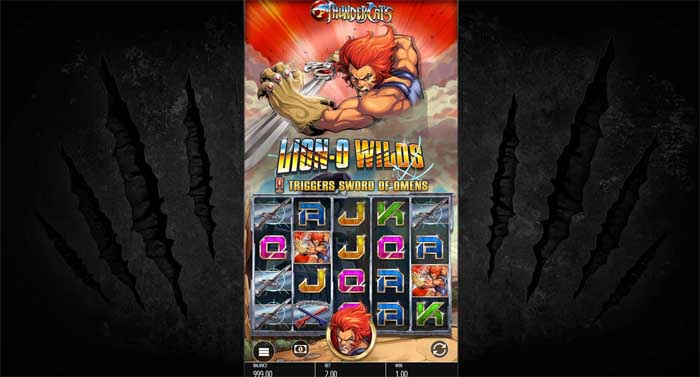 Head over to the paytable for an even more authentic comic book vibe. You literally get to flip through pages with speech bubbles and some cheesy comic book font. Once there, you’ll get to see that the symbols on the reels in Thundercats include the usual low value playing cards. These are A, K, Q and J. Moving up in value, we have a range of different weapons. Perhaps the most recognizable of them would be the sword, which is also among the higher paying of the weapon symbols. Then at last we have the most lucrative of the regular symbols on these reels is the game logo. It can offer payouts of up to 400 coins for a combination of 5. As for the layout, there are 5 reels and 4 rows in total, with 30 paylines. The amount of paylines are set, so there will be no adjustments going on in that department. And stakes run rather steep with that in mind. You will be able to wager anything from 40p per spin up to the maximum of £500 per spin. On top of that, the RTP is not the best, set at 95.5%.

Cheetara – one of the female Thundercats – is the game’s Wild symbol. She’s also just as lucrative as the game logo, making her one of the two highest paying symbols on the reels. In addition, you can also expect to see her in pretty much any position, anywhere on the reels. More importantly, though, the Wild will be able to replace any of the other symbols on the screen. That way it can help create new and perhaps better winning opportunities. However, it will not be able to replace the only other special symbol on these reels – the Bonus symbol. 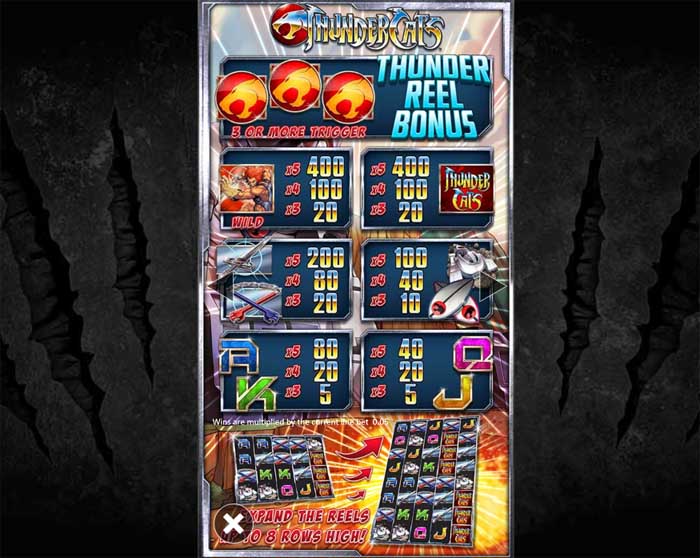 As for the Bonus symbol, it pictures the yellow cat logo against a red background. It too, like the Wild and pretty much all the rest of the symbols, can appear in any position, on any of the reels. But it doesn’t really offer any payouts of its own. Instead, the symbol will be responsible for triggering the game’s Thunder Wheel Bonus symbol. Basically, you will be spinning a wheel of fortune to determine the exact freespins feature that you will trigger. There are five different possibilities in total.

One is the Mumm-Ra feature, where you will receive 10 freespins. During the freespins you will collect Wild symbols. Then after the last freespin you will receive one super spin on an expanded grid with all of the Wilds you gathered. Next there’s the Slithe feature, also awarding you 10 freespins, only with sticky Wilds. You can receive an extra 5 freespins for landing a full stack of Wilds, too. Another feature is the Ultimate Thunder Spins, where you will get 5 freespins and stacked Wilds on reels 1, 3 and 5. Then there’s also the Jackalman freespins round, awarding you 10 freespins with an increasing multiplier for every Wild that you land. Last but not least is the Monkian feature, where special Hot Zones can turn symbols into Wilds throughout your 10 freespins.

In addition, there are five special features in the base game, too. Each of them has to do with a certain Thundercat and can be triggered by landing the respective special symbol. After this a wheel will determine the exact feature you will play, and the reels will expand to 8 rows for that feature.

Thundercats is certainly a bouquet of different special features. And that will certainly make any feature-hungry player very happy. But if you’re into comic book styled slot games with this particular kind of design and graphics, this will without a doubt be a great find. We also would like to point out the expanding reels feature, which offers great winning opportunities. But it’s still a very new title, so only time will tell how well it will cater to players.