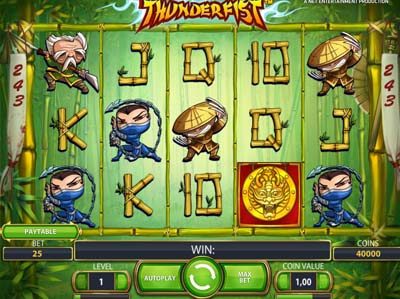 There’s something really intriguing about playing a game based on ninjas and kung fu groups, and Thunderfist presents its players with such a product. It’s set in the midst of a bamboo forest, and you’ll find that there are a variety of symbols included on its reels to match with this theme as well. The first of these is the regularly seen A, J, K, Q and 10 icons, which have all been designed in bamboo. Alongside these, you’ll find that there are various ninja characters as well, starting with the Wolverine-clawed samurai. He is joined by the female ninja with a spiked chain, an old warrior with a spear, another vicious looking female with destructive fans, and a martial artist as the very last one.

As well as these, you’ll find that the game has a total of five reels and three rows, and Netent has also added a total of 243 different ways to win as well. This is not able to be customised in any way, but you do have the chance to change your wager around per spin. This starts by adjusting the coin value between its minimum of £0.01 and it increases up to £0.50. There’s also a bet level which can be changed between one and 10, and this allows a maximum overall wager of £125 per round.

Included in this game are various special features, starting with the stacked wild symbol. This is represented by the Oriental wizard, and as a stacked wild, it has the possibility of covering an entire reel. These icons will substitute for any other icon on the reels, with the exception of the scatter symbols, in order to form a winning combination.

There’s also the addition of a scatter symbol, which is the golden gong, and this is the icon that will trigger the game’s freespins round. Should you manage to spin three of these into view, you’ll receive 10 freespins, four scatters give you 15 freespins, and five scatters will ensure you receive 20 freespins. During this round, you will see that there’s a random multiplier which comes into play, and this will increase your bet way wins by between times two and times five.

Thunderfist is definitely an overlooked game from Netent, but we really love it. It’s got a great theme, enticing special features and provides hours of entertainment.