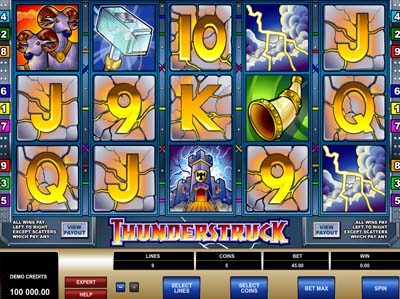 Telling the story of Thor and his epic adventures, Thunderstruck presents up a game with a great theme to work on. Featuring reels filled with relevant icons, including Thor himself, his hammer Mjolnir, a Viking horn, a vast castle entrance and lightning spikes, Microgaming certainly haven’t left much of a stone unturned when creating this one. There’s a calm but dramatic piece of music playing quietly in the background, which is only overrun by a reel spin which makes a chime.

There is a standard layout of five reels and three rows in this game, as well as nine inclusive adjustable pay lines. In addition, players can alter the amount of their wager by changing the amount of coins between one and five, and the coin value between £0.01 and £1.00 per active line. Maxing everything out will allow players to place a maximum overall wager of £45 per spin.

The aforementioned Thor icon acts as the game’s wild, and therefore, he will substitute any other symbol in order to craft a winning combination. In addition, should he make up a win, he’ll double the pay out amount.

There’s also a scatter icon included, represented by two golden-horned rams. Should you manage to spin three or more of these during the main game, you’ll be provided with a total of 15 freespins. All wins created during this round are tripled, and a further 15 freespins can also be triggered.

The inclusive ‘Gamble’ feature allows you to double or quadruple any win in the main game by guessing details of playing cards.

Thunderstruck takes a well-known theme and does a decent job of building on it. The game has nice graphics and game play incorporated into it, but Microgaming’s sequel does a much better job of bringing the whole thing together.