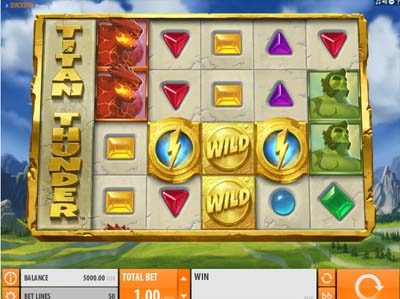 Titan Thunder presents players with reels filled with alternately coloured and shaped gemstones, which are mixed in with symbols of titans. These each have different appearances based on the elements – earth, air, fire, water and spirit. The game takes place against a backdrop of green fields, blue skies and high-peaked mountains, while an epic piece of music plays along at the same time.

There’s five reels and four rows as standard, and the game also contains 50 separate paylines. The coin value of the game can be changed between £0.01 and £2.00 per payline, meaning that the total wager can be changed between the minimum of £0.50 and the maximum of £100 per spin. Autoplay is also available, allowing up to 1000 consecutive spins of the reels.

Titan Thunder has a Titan Thunder Feature, which is randomly triggered during the main game. This brings a sixth reel into play at the very front of the other five, and up to eight Lightning Wilds are added to the reels alongside.

The Lightning Wilds and the standard wilds will substitute for all other symbols on the reels, except for Freespin Scatter symbols.

Three or more Freespin Scatter symbols, represented by the lightning bolt, will provide eight freespins of the reels and triples your wager placed. A single titan is chosen randomly before the freespins begin, and this becomes wild for the duration of the round. With each spin, a titan symbol is randomly selected and becomes a 2×2 symbol.

Titan Thunder from Quickspin is a great game overall, thanks mainly to its freespins feature with enlarged symbols and titan wild. The graphics and animation included in the game just add to its appeal, while the randomly activated Titan Thunder Reel is a wonderfully unique perk.