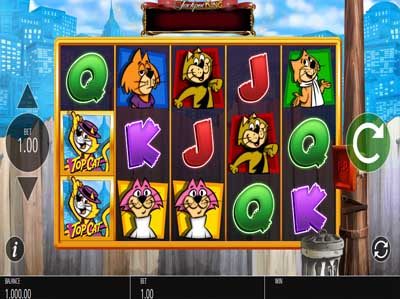 Do you remember the cartoon starring the classy alley cat and his feline gang? Well Top Cat is back in his very own slot game and namesake under the careful supervision of developer Blueprint Gaming. The familiar alley is the backdrop of this slot and the equally recognizable trashcan represents the spin button. And even the soundtrack is reminiscent of the original cartoon theme. More importantly, though, you will get to meet all your favorite characters from the popular Hana-Barbera animated series. First up are the obligatory lower value playing card symbols A, K, Q and J. Following them is Fancy-Fancy, Spook, Choo-Choo and Brain. Last but not least is Top Cat himself.

The layout features the customary 5 reels and 3 rows, with 20 paylines. Though you won’t have the option of regulating the number of paylines, you can enjoy a pretty flexible betting range. Stakes span from as little as 20p per spin up to £500 per spin. However, the RTP is in the lower range at about 92.49%.

Top Cat has a number of special features to entertain you. Let’s first get the more customary Wild symbol out of the way, though. Picturing a half-eaten fish skeleton, the Wild is the highest paying symbol on the reels and substitute for all symbols, except for the Bonus symbol. 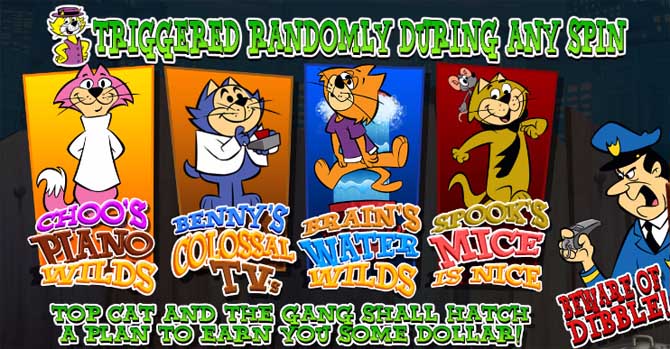 There are four random features here that can take place at any given time during gameplay. Choo’s Piano Wilds feature, for example, will turn random symbols on the reels into Wilds. Brain’s Water Wilds will have the water from a fire hydrant turn full reels Wild. Then there’s Benny’s Colossal TVs feature, which will see Benny come onto the screen. Following this, he will make TV’s randomly appear on the screen, revealing mystery symbols in their stead. And finally, there’s Spook’s Mice is Nice feature, which will see mice come onto the screen and jumble the symbols around to create winning combos. 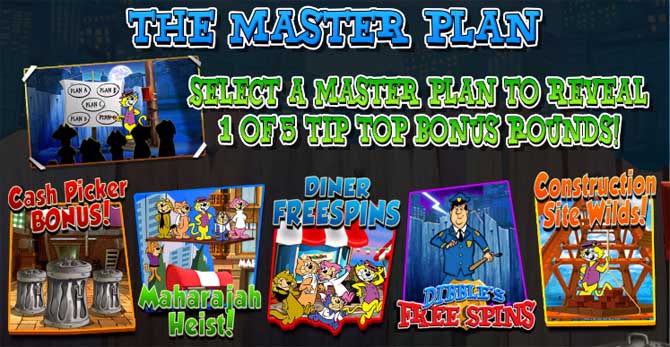 But what you will really want to look out for is the Master Plan bonus game. In order to activate it, you will need to land 3 Bonus symbols on reels 1, 3 and 5. This will give you the opportunity to choose from 5 different features. First up is the Cash Picker bonus, where you will need to pick trash cans to reveal your multiplier prizes. Next is the Maharaja Heist feature, in which you will first follow a trail to gain multipliers, after which you will win different cash prizes. There are also 2 freespins features available: the Diner freespins and Dibble’s freespins. And last but not least there’s the Construction Site Wilds, which can potentially award you additional Wilds and freespins.

Top Cat is a bundle of joy and will be especially pleasant for those, who’ve seen the original series. But even if you haven’t, you can still greatly benefit from the numerous bonus features, as well as from the opportunity of winning big and hitting the Jackpot King. The RTP is a bit on the low side, but the slot is packed with fun bonus features, making it a favorite amongst many slot players.