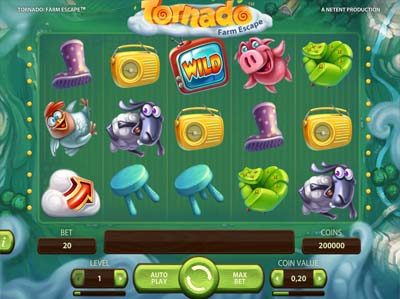 This product from Netent presents its players with a wonderful theme, which tells the story of various farm animals who are looking to escape their pens in order to go on vacation. And how would they do this? By hitching a ride on a tornado, of course. Because of this, you’ll find that the game features various different icons, and these start with five symbols of random items swept up by the wind storm in question. These include a stool, a purple Wellington boot, a yellow wireless radio, a plush looking chair and a red suitcase filled with clothes. The five different animals wishing to escape the farm provide the remaining icons, these being the hen, the sheep, the pig, the horse and the cow.

Added alongside the icons, Netent have provided a total of five reels and three rows, as well as a total of 20 different pay lines. This is not something that is able to be customised in any way, and instead, you only have the option of changing around the wager you place. This is done first of all by adjusting the value of a single coin between £0.01 and £1. There’s also the chance to change around the bet level between one and 10, and this will therefore provide you with the possibility of placing a maximum overall wager of £200.

The game has a couple of intriguing and unique special features, and these start with the included ‘Tornado Feature’. This is triggered when a hot symbol lands in any position on reel one, and a cold symbol lands anywhere on reel five. The tornado will then fly around the screen collecting all active and wild symbols. Wilds will substitute for the active symbol during the feature as well.

There’s also a ‘Storm Feature’ added to the game as well, and this is randomly triggered when you spin the reels. The storm will start from the outermost position on the reels, and this moves one position generating wild icons as it goes.

The wild icon of the game is represented by the television set which has been swept up, and it will substitute for all other icons on the reels in order to form a winning combination, except for the hot and cold symbols.

We have a great admiration for this game, and it’s always one that we enjoy playing on a frequent basis, thanks to its exceptionally entertaining theme and special features.