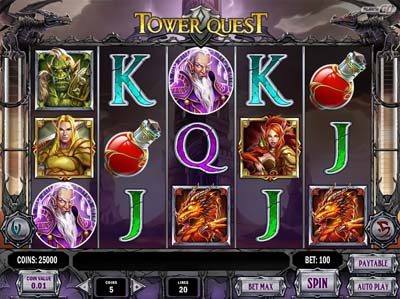 You’ll need to have all of your wits about you in the Tower Quest slot game from Play’n Go, as you’ll be dropped straight into the midst of an all out war against the evil wizard. You’ll come face to face with both friends and enemies along your way to The Dark Tower, and it will test your might in battle. As such, you’ll find that the reels of the game have been imbued with theme-relevant imagery, although the initial icons are represented by the A, J, K and Q symbols. Joining these are five other standard, medium paying symbols, and these are in the form of three villains – the ogre, the ghost king and the red dragon – and two heroes – the male and the female warriors.

The game is offered up on a five reel and three row interface, while the developer has also included 20 different pay lines which are fixed pay lines, so you cannot alter them in any way. However, you do have the chance to change your wager around, and this is done first of all by altering the value of a single coin between £0.01 and £1.00, and this is followed up by the ability to adjust the amount of coins played per line. Therefore, a maximum total be value of £100 per spin is able to be played.

Play’n Go have ensured that your quest to defeat the evil wizard will not merely be done on might and strength alone, and as such, you’ll have a few special features incorporated into your game play to assist. This begins with the wild symbol, which is represented by the wizard’s tower. This stands in for all other icons, except bonus and scatter symbols, in order to form a win, and it’s also a stacked symbol, meaning it can cover an entire reel.

Scatter symbols come in two different forms, one of which is a vial filled with red liquid, and the other a vial of blue liquid. Whenever one of these appears on the reels, it will be collected and stored in the meters down either side of the interface. When you have collected enough of these, you can manually trigger your preferred special freespins feature, with different options available for 10, 20 and 30 collected vials.

Finally, the icon of the evil wizard is the bonus symbol of the game, and three of these will trigger the bonus round. In this round, you need to play a game of cards against the villain, and defeating him will conquer the dark tower. You’re able to win up to 500 times your total wager placed during this bonus feature as well!

Tower Quest is one of our favourite offerings from this developer, thanks to its great overall theme and incorporated specialities.