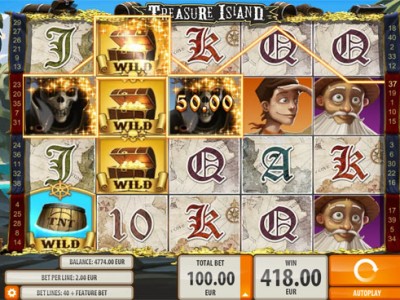 Treasure Island awaits ye, mateys! Or, something to that effect. Welcome to this beautifully designed game by Quickspin. A game that tells a thousand pirate tales, whilst only focusing on one. Treasure Island. As can be expected, the reels are filled with various different pirates. There’s the swarthy Captain Hook, the female pirate with a patch over her eye, the young lookout and the old, seafaring sailor. In addition, you’ll find a skeleton dressed in pirate’s attire as well.

The game features an adventurous soundtrack to keep you compelled as you spin through it’s five reel, four row layout. There’s a total of 40 non-customisable paylines incorporated into the game as well, and the coin value is able to be changed from the minimum bet of £\€\$0.50 up to the maximum of €200 per spin. There’s also a nice selection of extras included in gameplay.

The wild symbol in Treasure Island is represented by a treasure chest filled with gold. These are also stacked wilds, and they will substitute for all other symbols to create a win, except bonus and barrel wild symbols.

The compass acts as the game’s bonus symbol, and three of these scattered across the reels will trigger the bonus round. Here, you need to pick one of the compasses to receive either an instant win, freespins or the Treasure Hunt Bonus. This bonus addition provides you with two shovels and five ‘X’ marks on a map. You simply select two ‘X’ marks to dig up and reveal an instant win.

The freespins round begins with an island hop bonus. You click on islands to receive rewards and each one provides extra freespins, extra wilds, super wilds or locking barrel explosions. If the locked barrel feature is active, barrel wilds act as sticky wilds. Super wilds are added to stacks of wilds, while extra wilds will turn one of the character symbols wild.