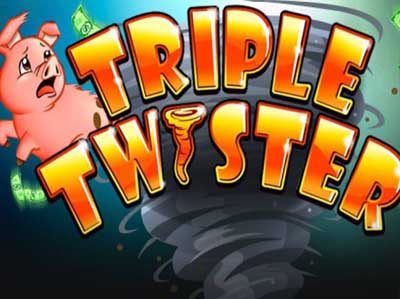 Remember the iconic 1990’s disaster movie Twister? The one about the terrifying storm and tornado that came with it, wreaking havoc everywhere? Well, Triple Twister by online casino software developer RTG may not exactly replicate the tension and thrill of the movie, but it will be sure to offer a fun gaming experience. The graphics here are cartoonish and in all honesty have little to do with the film, besides that there really is a tornado present. This title has slightly more of a comical vibe going on. It all takes place on a farm, and in the backdrop you can see green fields with a barn and long picket fence. However, the sky above is dark and menacing, with the occasional bolts of lightning striking from within the storm clouds. There’s no soundtrack in this game, however. But you can hear the wind howl forebodingly every now and then when you land winning combinations. 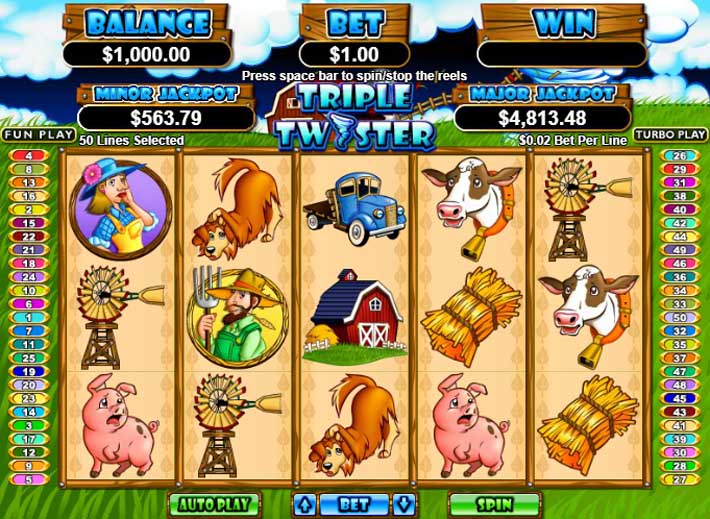 The symbols in Triple Twister start with the lower value icons of inanimate farm objects. These are the stack of hay, following which is the wooden bucket. And after them comes the old pickup truck. Next are a green tractor and a windmill. And following these we have several farm animals that look quite worried about the upcoming storm. These are the dog that’s covering its head with its front paws and the distressed pig. And the third animal on these reels is the cow. The higher value icons present include a barn and the two highest paying icons feature the farmer and his wife. Both can give you up to 3,333 coins in payouts each. As for the layout in this online slot game, it features the common 5 reel by 3 row grid. However, there are 50 paylines available in total, which is slightly unusual for this provider. Furthermore, the paylines are fixed, so you won’t have the habitual flexibility of regulating them. Hence, stakes here start off relatively steep at 50c per single spin. And the largest amount you will be able to wager on these reels is $12.50 per spin.

The Wild symbol on these reels comes in the form of Twister, the tornado. It can only appear on the middle reel in the base game, though. However, when it does appear, it will expand to cover the whole reel. And what’s more, it will substitute for any of the regular symbols on the reels. And thus, it can help complete winning combinations and boost your prizes. Better yet, the Twister symbol will actually also triple the winnings from combinations it helps form. And as if that weren’t enough, it can even replace the game’s Scatter symbol.

The Scatter, in turn, you will also want to keep an eye out for, as it can trigger this title’s single special feature. It comes in the form of a weather vane and can appear in any position, anywhere on the five reels. It doesn’t offer much in terms of value, though. So, to trigger the freespins bonus round, you will need to land a minimum of 3 Scatter symbols all at the same time on the reels. This will reward you with a total of 9 freespins. 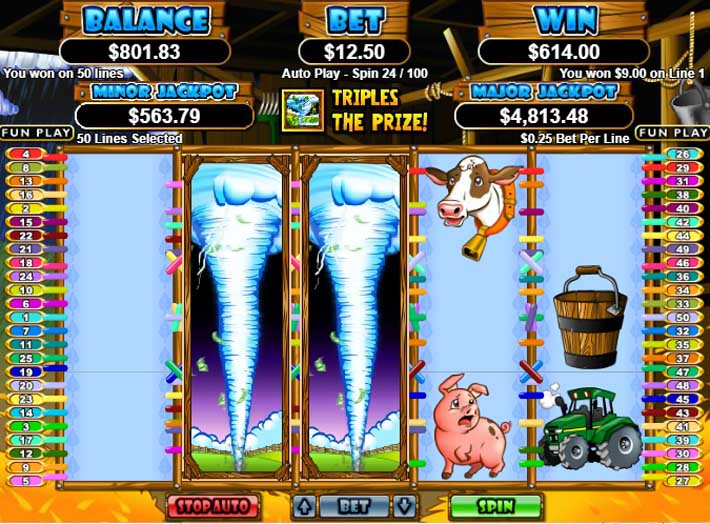 All throughout the duration of the freespins feature, you can benefit from a replicating Wild. This means that any time you land the Twister symbol on the middle reel, it can randomly also replicate itself to reel 1 or 5. And maybe it can even transfer to both of those, covering a total of 3 reels in total. In addition, players can also retrigger this feature by landing another 3, 4 or 5 Scatter symbols anywhere on the screen during the same spin. This will award you another 9 freespins on top of the ones you have left.

On top of that, the bonus round also comes with a Win-Win feature. This means that if you were to end the feature with a total prize of 10x your total stake or less, you will receive a cash prize as well. It can be anything from 2x to 8x times your total bet, depending on the amount you exited the feature with. And if you won nothing during the freespins round at all, you will benefit from a bonus of 100 times your total bet.

Triple Twister is a pretty decent online slot game, although it may not be very suitable for penny players. It’s very simplistic, but has decent graphics and even some animated features. In addition, though there’s only the one bonus round, it can be a decently rewarding one. But do keep in mind that this is a fairly volatile offering. So, you may require some patience and good bankroll managing skills before you actually get to trigger the freespins bonus.