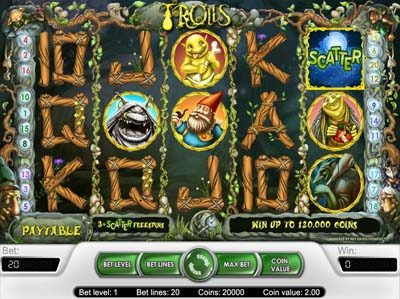 Online video slot games based on mythological beings are often considered some of the best, and Trolls presented by Netent is exactly one of those games. It will transport you to a fantasy world which is owned by the mythical creatures, and as such, they appear fairly frequently on the reels. The first set of its icons are the regularly seen A, J, K, Q and 10 symbols, and these are designed in wooden structures. The other six standard symbols are of a troll family. This starts with the king of the civilisation, followed by the mother troll of the family. There’s also a warrior troll with its wooden club for beating back enemies, and a stone-like creature as well. A baby troll makes up the fifth icon, while a being which looks like a garden gnome is the final one.

Joining all of these symbols is a five reel and three row layout, and Netent have also included of 20 pay lines for you to place wagers on. Of course, these can be customised in order for you to design the game to your own preferences, and this is done by using the ‘Bet Lines’ button. Furthermore, you can adjust the amount of the wager you place, which is completed by altering the ‘Coin Value’ between £0.01 and £1 per line.

Amongst the specialities included in this game, you’ll find a wild icon has been added, and this is a tree stump acting as the troll family’s home. This will substitute for all other icons on the reels in order to receive a winning combination, and it will double your pay out whenever it’s acting as a substitute. The only icon that it does not stand in for is the scatter.

There’s also a golden wild, and this is the golden version of the standard one. This one is only able to appear on the third reel of the game, and it acts in the same way as the standard offering, except it will quadruple your pay out instead.

Finally, there’s also a scatter symbol included in the game, and this is represented by the moonlit sky. Scatters will pay out in any case if they show on the reels, and they pay out your total bet times by a multiplier. Three or more of them showing up will provide you with the freespins round, with 10 given to you for three scatters, 20 freespins for four scatters and 30 freespins offered up for five scatter icons. Wins from this round pay out triple the amount.

It’s probably quite often overlooked for other more graphically pleasing video slot games, but Trolls is definitely not one to shy away from. It’s a great offering and really acts as a welcome addition to the Netent catalogue.